Home   Death Meter   Death   Things to do before death   Confucianism

THINGS TO DO BEFORE YOU DIE - CONFUCIANISM

Confucius' love of antiquity was motivated by his strong desire to understand why certain rituals, such as the ancestral cult, reverence for Heaven, and mourning ceremonies, had survived for centuries.He had faith in the cumulative power of culture. Confucius' sense of history was so strong that he saw himself as a conservationist responsible for the continuity of the cultural values and the social norms that had worked so well for the civilization of the Chou dynasty. 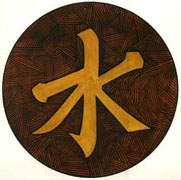 Mencius, Xunzi, and others sustained Confucianism after Confucius, but it was not influential until Dong Zhongshu emerged in the 2nd century BC. Confucianism was then recognized as the Han state cult (introducing religious elements and sacrifices to Confucius), and the Five Classics (see Texts, below) became the core of education. In spite of the strong influence of Daoism and Buddhism, Confucian ethics have had the strongest influence on the moral fabric of Chinese society. A revival of Confucian thought in the 11th century produced Neo-Confucianism, a major influence in Korea during the Choson dynasty and in Japan during the Tokugawa period. In 1530 AD, a Ming emperor reformed the Confucian cult to focus more on Confucius' teachings than the sage himself (e.g. images of Confucius were replaced with inscribed tablets). The cult of Confucius declined after the founding of the Chinese Republic in 1912, but the influence of Confucianism continues.

The practice of polytheism and the cult of ancestor worship have given rise to many festivals, which are celebrated throughout the year with the performance of a variety of rites and rituals. Many of these rites and rituals are non-Buddhist in character, but because of the identification of the Chinese population with the Buddhist religion,Non-Chinese and many Chinese themselves think that these rites and rituals performed during Chinese festivals are Buddhist in origin. In ancient times in China, whenever an event arose for the people to meet socially, a festival was held during which relatives, friends and neighbours could intermingle and indulge in some enjoyment and merry-making. However, in so doing, they did not forget their dead ancestors and the deities who had bestowed upon them certain favours that enabled them to participate in the festivities.

Thus, it came about that certain religious practices were observed in the form of thanksgiving, or to honour certain warriors and outstanding statesmen who had been deified for the distinguished services they had rendered to the community or the nation. When Buddhism was introduced in China, it was readily accepted by the people because it did not interfere with their traditions and customs. The people continued to freely celebrate the festivals they had been doing for a long time, and a few other festivals were added after they became Buddhists. 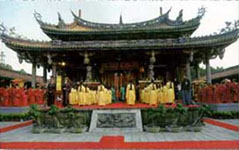 Confucius proclaimed that one must follow certain cardinal virtues, such as love, righteousness, propriety, and wisdom, in a social context of duties and obligations, voicing his highest principle in what is probably the earliest formulation we have of the Golden Rule, some five centuries before Christ and Rabbi Hillel: "Do not do unto others what you would not have them do to you." For Confucius, this applied especially to what he termed the Five Relationships, or Wu-lun: between ruler and subject, husband and wife, father and son, elder and younger brothers, and older and younger friends.

This equation called for the respect and obedience of subjects, wives, sons, and younger brothers in return for benevolence and support on the part of rulers, husbands, fathers, and elders. Despite the male dominant language, K'ung's formula was radical for its day in that it called for an unprecedented reciprocal kindness and benevolence on the part of the more socially empowered group which should be followed in their lifetime. Over time, however, Confucianism became mired in an artificial construct of rituals, standards of conduct, and hierarchies of precedence which should be carried in their life to attain a spiritual death. As in almost all other religions, reformers arose along the way who attempted to free up the tradition and return it to its underlying vision of freedom and fairness.

Confucian sacrifices have traditionally been performed within families to family members, rivers and mountains and heavenly bodies. During a sacrifice participants are expected to bow three times before offering a pig, a bullock and a goat. Rooted in animism and shamanism these sacrifices are regarded as means of maintaining order in the natural world. Rituals and sacrifices directed towards ancestors have traditionally been expressions of reverence, not spiritual acts or ways of seeking help from the ancestors but to be done before death. Hsun Tzu wrote: "the motives of sacrifice are remembrance and longing. By it loyalty, faith, love and reverence reach their utmost, and the emotions moderated and refined by ritual are most fully expressed.

Rituals have traditionally been performed by the state and family. A great emphasis has been placed on music as an accompaniment for certain rites. Many of the rituals performed by the Chinese Emperor had their roots in the idea of maintaining order within the natural world. If the order of the natural world was disrupted then famines, floods, rebellions and other disasters would occur.

The emperor presided over special religious ceremonies conducted over a special Altar of Heaven that only he alone was allowed to perform. During these ceremonies the emperor approached the altar barefoot, accompanied by an orchestra playing hymns, and prostrated himself before the celestial deities. It was believed that whether or not the coming year was to be good or bad was determined by how skillfully he performed the ritual. The performance of this ritual was critical to receiving the Mandate of Heaven where each one in this religion should witness such rites and ritual before death.

The T'ai-shen (spirit of the fetus) protects the expectant woman and deals harshly with anyone who harasses the mother to be. A special procedure is followed when the placenta is disposed of. The mother is given a special diet and is allowed rest for a month after delivery. The mother's family of origin supplies all the items required by the baby on the first, fourth and twelfth monthly anniversary of the birth. This is an utmost duty to of a parent to be done to their daughter in the period of their life before death.
Reaching Maturity
This life passage is no longer being celebrated, except in traditional families. It takes the form of a group meal in which the young adult is served chicken. Those days it is considered as a life passage for each one has to cross a stage of maturity before death during which this ceremony is performed.
Marriage
A person is said to be a complete man only after he performs a set of cardinal duties to his family members before his death and one such way in which he can bestow his duties is through marriage. This is performed in six stages,
Proposal
The couple exchanges the eight characters: the year, month, day and hour of each of their births. If any unpropitious event occurs within the bride-to-be's family during the next three days, then the woman is believed to have rejected the proposal.
Engagement
After the wedding day is chosen, the bride announces the wedding with invitations and a gift of cookies made in the shape of the moon.
Dowry
This is carried to the groom's home in a solemn procession. The bride-price is then sent to the bride by the groom's parents. Gifts by the groom to the bride, equal in value to the dowry, are sent to her.
Procession
The groom visits the bride's home and brings her back to his place, with much fanfare.
Marriage and Reception
The couple recites their vows, toast each other with wine, and then take center stage at a banquet.
Morning after
The bride serves breakfast to the groom's parents, who then reciprocate.
Death
At death, the relatives cry out aloud to inform the neighbors. The family starts mourning and puts on clothes made of a coarse material. The corpse is washed and placed in a coffin. Mourners bring incense and money to offset the cost of the funeral. Food and significant objects of the deceased are placed into the coffin. A Buddhist or Taoist priest (or even a Christian minister) performs the burial ritual. Friends and family follow the coffin to the cemetery, along with a willow branch which symbolizes the soul of the person who has died. The latter is carried back to the family altar where it is used to "install" the spirit of the deceased. Liturgies are performed on the 7th, 9th, 49th day after the burial and on the first and third anniversaries of the death.
Loyality
Loyalty was also an extension of one's duties to friends, family, and spouse. Loyalty to one's family came first, then to one's spouse, then to one's ruler, and lastly to one's friends. Loyalty was considered one of the greater human virtues. Confucius also realized that loyalty and filial piety can potentially conflict. It is always believed that through loyalty a person can witness a painless death.

Confucianism has been embraced as an answer to the spiritual vacuum that exists in China today. Scholar Kang Xiaoguang, a major advocate of Confucian education, told Newsweek, "Chinese society today is at its worst ever. The problem is that there are no moral standards to regulate how people treat each other, their business partners, their friends and family. Relationships are ambiguous and we have no way of judging what makes for a happy life." Kang wants Confucian education to be mandatory at all schools. Thus according to the religion of Confucianism the above mentioned rituals and duties a few where the members of the religion has to follow before death.