Home   Death Meter   Death   Things to do before death   Jainism

THINGS TO DO BEFORE YOU DIE - jainism

The founder of the Jain community was Vardhamana, the last Jina in a series of 24 who lived in East India. He attained enlightenment after 13 years of deprivation and committed the act of salekhana, fasting to death, in 420 BCE. Jainism has many similarities to Hinduism and Buddhism which developed in the same part of the world.

They believe in karma and reincarnation as do Hindus but they believe that enlightenment and liberation from this cycle can only be achieved through asceticism. Jains follow fruititarianism. This is the practice of only eating that which will not kill the plant or animal from which it is taken. They also practice ahimsa, non-violence, because any act of violence against a living thing creates negative karma which will adversely affect one's next life. 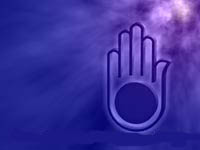 By the first century A.D., the Jain community evolved into two main divisions based on monastic discipline: the Digambara or "sky-clad" monks who wear no clothes, own nothing, and collect donated food in their hands; and the Svetambara or "white-clad" monks and nuns who wear white robes and carry bowls for donated food. The Digambara do not accept the possibility of women achieving liberation, while the Svetambara do. Western and southern India have been Jain strongholds for many centuries; laypersons have typically formed minority communities concentrated primarily in urban areas and in mercantile occupations. In the mid-1990s, there were about 7 million Jains, the majority of whom live in the states of Maharashtra (mostly the city of Bombay, or Mumbai in Marathi), Rajasthan, and Gujarat Karnataka, traditionally a stronghold of Digambaras, has a sizable Jain community.

The Jain laity engages in a number of ritual activities that resemble those of the Hindus around them. Special shrines in residences or in public temples include images of the Tirthankaras, who are not worshiped but remembered and revered; other shrines house the gods who are more properly invoked to intercede with worldly problems. Daily rituals may include meditation and bathing; bathing the images; offering food, flowers, and lighted lamps for the images; and reciting mantras in Ardhamagadhi, an ancient language of northeast India related to Sanskrit.

Santhara or Sallekhana
Santhara or Sallekhana is a rare event in the Jain tradition, in which a Jain decides to obtain moksha (salvation) and stops eating and drinking water, waiting for death. To a Jain Sallekhana it is the conscious act of embracing death. This is different from suicide as suicide comes from passionate feeling eg. anger, despair Sallekhana happens when the individual is free from all passions and death is already a certainty. Old age and terminal disease are the two times when a Jain could decide to get involved in the ritual of Sallekhana. Death through Sallekhana allows the soul to be purified.
Jain Pilgrimages

Kartak Purnima occurs in October/November. Thousands of Jains go on pilgrimages on this day to sacred Jainsites. Pilgrimage plays an important part in Jain life for Digambaras and some Svetambaras, although there are no compulsory pilgrimages. When lay Jains go on a pilgrimage they take on some of the lifestyle and attitudes of a Jain ascetic (a monk or nun).At a number of pilgrimage sites associated with great teachers of Jainism, the gifts of wealthy donors made possible the building of architectural wonders.

Shatrunjaya Hills (Siddhagiri) in Gujarat is a major Svetambara site, an entire city of about 3,500 temples. Mount Abu in Rajasthan, with one Digambara and five Svetambara temples, is the site of some of India's greatest architecture, dating from the eleventh through thirteenth centuries A.D. In Karnataka, on the hill of Sravana Belgola, stands the monolithic seventeen-meter-high statue of the naked Bhagwan Bahubali (Gomateshvara), the first person in the world believed by the faithful to have attained enlightenment, so deep in meditation that vines are growing around his legs.Jains visit temples or other places that relate to the lives and deeds of the Tirthankaras. Sammed Shikhara, Shatrunjaya, Mount Abu are some of the most famous pilgrimage sites which they consider to be visited before death.

Samayika is the practice of equanimity, translating to meditation. It is a ritual act undertaken early in the morning and perhaps also at noon and night. It lasts for forty-eight minutes (Two Ghadis) and usually involves not only quiet recollection but also usually the repetition of routine prayers.

The ritual is chanting and praying about the good things which the jains follow till one's death.

Pratikramana
Pratikramana is performed in the morning for the repentance of violence committed during the night, and in the evening for the violence during the day and additionally on certain days of the year. During this, the Jain expresses remorse for the harm caused, or wrong doing, or the duties left undone before they attain moksha or death.
Worship of Jain idols

Worship before the Jain idols, bowing to the idols, and lighting a lamp in front of the idols is an ideal way to start the day for many Jains. More elaborate forms of worship (puja), as described, is a regular daily ritual usually done in the temple. The worshipper enters the temple with the words 'Namo Jinanam' 'I bow to the Jina', and repeats three times, 'Nisihii' (to relinquish thoughts about worldly affairs). The simpler surroundings of the household shrine can ales provide a suitable setting. The members of some sects of Jainism don't believe in worship of the Jina image. They believe in meditation and silent prayers. Worship, or puja, can take many forms and considered to be most important part of a jains life to be followed till death.
Mauna Agyaras

Mauna Agyaras is a day of fasting and silence observed by the Jains. This special event is held during the November-December period. The word 'mauna' means 'silence'. The ritual of fasting and maintaining silence continues for the whole day. During this ritual, a jain person meditates on the five important holy beings in Jainism; monks, teachers, religious leaders, Arihants (enlightened masters) and Siddhas (liberated souls).Fasting is very common among Jains and as a part of Jain festivals. Most Jains fast at special times, during festivals, and on holy days. Paryushan is the most prominent festival, lasting eight days in Svetambara Jain tradition and ten days in Digambar Jain tradition during the monsoon. The monsoon is a time of fasting. However, a Jain may fast at any time, especially if he or she feels some error has been committed.

Variations in fasts encourage Jains to do whatever they can to maintain whatever self control is possible for the individual. Monks, nuns and laity fast as penance and to control desires. Janis believes fasting purifies the body and the mind, reminding one of Mohair's emphasis on renunciation and asceticism. Mahavir spent months fasting and in contemplation. It is not sufficient simply to stop eating when fasting; the person must also stop wanting to eat. Control over one's mind is a major goal. If one continues to desire food, the fast is fruitless. Thus fasting is a very important aspect of a Jain for them to attain a peaceful death.

Snatra puja
The ritual bathing of the image (Snatra Puja) is symbolic to the bathing of the newborn Tirthankara by the gods (celestial beings). A simple symbolic act is to touch one's forehead with the liquid used to bath the idol. Bathing the idol also takes place during the Panch Kalyanak Puja, a ritual to commemorate the five great events of the Tirthankara's life, namely conception, birth, renunciation, omniscience and moksa.This is a very important ritual in Jainism to be seen before death.
Eightfold puja 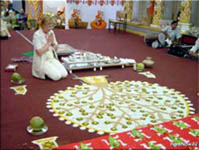 One of the best-known Svetambara Jain ceremonies is the eightfold puja (eightfold offering). This involves the worshipper making eight symbolic offerings to the image of a tirthankara.Before the ritual the worshipper washes themselves and puts on clean unstitched clothes that are normally used only for worship. These clothes are never used when eating or going to the toilet. Worshippers enter the temple and say "nisihi". This means "giving up" and indicates that they are moving from the secular activities into spiritual ones. They say it again as they enter the inner room that contains the images of the tirthankaras.The worshipper walks three times clockwise round the area containing the images to symbolize the three jewels of right faith, right knowledge, and right conduct.

There are set texts to be chanted during this. Then the worshipper makes 8 offerings, Water poured on the image, to cleanse it and to symbolize purity. Sandalwood and saffron paste: dabbed on the key parts of the image. Sandalwood is thought to cool fever, so this action symbolizes cooling the passions. Flowers, a garland round the image symbolizes faith in the teachings, or forgiveness, or the fragrance of the three jewels. Incense waved at the image to symbolize the removal of ignorance and desire, or the burning away of karmic particles. Light a lamp is waved towards the image to symbolize enlightenment destroying the darkness of ignorance, or the suppression of activity. The last three offerings are made at a distance from the image are rice, sweets and fruit.

Finally each worshipper spends time in prayer and contemplation of the image. This eight fold offering is a very important ceremony in a Jains life which has to be performed by each individual before death.

Thus the core of Jainism is non-violence (ahimsa) and therefore killing is strongly forbidden. Conforming to this faith, most Jains are vegetarians and cover their mouths to avoid accidental swallowing of germs & insects. Jainism is rigorous and preaches self control and asceticism and so the jains strictly adhere to the rites and rituals and to follow and do them before their lifetime finishes.