Bahai believe the soul is tied to the human body at conception, and after death it continues on through the spiritual worlds of God eternally. Bahais beliefs include the oneness of GOD, the soul's immortality, and the evolution biological, spiritual, and social value of mankind. On the other hand, they reject the common concept of angels. They also reject the Trinity, and the reincarnation teaching of Hinduism.

Baha'is believe that the purpose of being here in the physical realm is to know and to love the Creator, as well as acquiring and practicing virtues. This is done through personal effort arising from free choice. These virtues are the faculties of the soul that are essential provisions for its journey in the infinite worlds of God. As in the world's other religions, the Bahai concept of life after death is deeply integrated into teachings about the nature of the soul and the purpose of this earthly life. 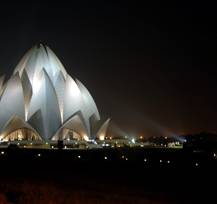 The Bahai concept of life after death is inseparable from the reality of the soul and the purpose of earthly life. Baha'u'llah confirms the existence of a separate, everlasting soul for every human. Although non-material, the soul is intimately associated with the physical body. One's soul can be expressed through the individual's attributes or spiritual qualities. The soul is the motive force for love, compassion, courage, faith and other humane qualities. The soul lives on after the body's death, embarking on a spiritual journey towards God through many "worlds" or planes of existence. Progress on this journey, in traditional terms, is likened to "heaven." If the soul fails to develop, one remains distant from God. This condition of remoteness from God can in some sense be understood as "hell.

" Thus, heaven and hell are regarded not as literal places but descriptions of one's spiritual progress toward the light of God.Bah�'u'll�h taught that individuals have no existence previous to their life here on earth. Neither is the soul reborn several times in different bodies. He explained, rather, that the soul's evolution is always towards God and away from the material world. A human being spends nine months in the womb in preparation for entry into this physical life. During that nine-month period, the fetus acquires the physical tools necessary for existence in this world. Similarly, this physical world is like a womb for entry into the spiritual world. Our time here is thus a period of preparation during which we are to acquire the spiritual and intellectual tools necessary for life

The Baha'i teachings state that, since the existence after death has no similarity to this world, there are no adequate words to describe it. The mysteries of man's physical death have not been divulged, and still remain unread. By the righteousness of God! Were they to be revealed, they would evoke such fear and sorrow that some would perish, while others would be so filled with gladness as to wish for death. What the Baha'i teachings do assure us is that the person who has achieved a state of liberation (Moksha) attains to a state of joy and inner gladness. Death proffereth to every confident believer the cup that is life indeed.

It bestowed joy, and is the bearer of gladness. It conferred the gift of everlasting life. Ascending into the world of spirit can be potentially a great joy as the soul leaves behind the limitations of physical reality. Baha'u'llah likened death to birth. He explains that the spiritual realm beyond is as different from this world as this world is different from that of the Baby while still in the womb of its mother. Cultivation of life's spiritual side has several benefits. First, the individual increasingly develops those innate qualities that lie at the foundation of human happiness and social progress. Such qualities include faith, courage, love, compassion, trustworthiness and humility. As these qualities are increasingly manifest, society as a whole advances. Another effect of spiritual development is alignment with God's will. This growing closer to God prepares the individual for the afterlife.

Baha'u'llah teaches, however, that there is some element of truth in the concept of rebirth. But it has been misunderstood by those who believe in a literal rebirth of the self-same individual.Baha'u'llah states that what has happened in mankind's spiritual history is that certain types of people have come to the world again and again. The clearest examples are in the stories of the Avatars themselves. In the time of Buddha, it was his own cousin, Devadatta, who plotted and schemed against him. In Baha'u'llah's time it was his own half brother, Mirza Yahya, who tried to destroy him. Each of these persons represents envy and hatred of the truth, the spirit of Yahya was the return of Devadatta who was in turn the return of Duryodhana who was the return of Kaikei or Ravana.It is the same with those who supported and became the disciples of the Avatar. It can be said that the companions of Baha'u'llah were the return of the disciples of the Buddha.

Bahai's belief about the afterlife is very similar to, but not exactly likes, the Christian concept of Heaven. They do not believe there is a physical Hell for according to them hell is a metaphor, a state of existence in the next life. They also do not believe in reincarnation and Satan, as for them evil is simply an absence of good, much like darkness is simply an absence of light. The soul does not die; it endures everlastingly. When the human body dies, the soul is freed from ties with the physical body and the surrounding physical world and begins its progress through the spiritual world. Bahais understand the spiritual world to be a timeless and placeless extension of our own universe--and not some physically remote or removed place. Entry into the next life has the potential to bring great joy. Bahai'u'llah likened death to the process of birth. He explains: "The world beyond is as different from this world as this world is different from that of the child while still in the womb of its mother.

" In the final analysis, heaven can be seen partly as a state of nearness to God; hell is a state of remoteness from God. Each state follows as a natural consequence of individual efforts, or the lack thereof, to develop spiritually.

The key to spiritual progress is to follow the path outlined by the Manifestations of God. The soul does not die. Since it is not composed of material elements, it will not decompose when the human body dies.