Buddha accepted the basic Hindu doctrines of reincarnation and karma, as well as the notion, common to most south Asian religions, that the ultimate goal of the religious life was to escape the cycle of death and rebirth (samsara). Buddha asserted that what kept us bound to the death/rebirth process was desire, in the generic sense of wanting or craving anything in the world of samsara. 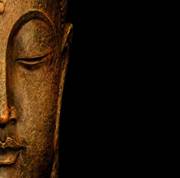 Hence the goal of getting off the ferris wheel of reincarnation necessarily involves freeing oneself from desire. Nibbana-- or, in later Buddhism, nirvana--is the Buddhist equivalent of moksha.None of us can avoid death and if we are not free from the vicious cycle of death and rebirth, we are doomed to the endless cycles of life and death and its paradoxical nature of suffering, of happiness and sadness, youth and ageing, healthiness and sickness, pain and death, all because we are so attached to the existence in the first place.

Rebirth
Buddhists understand life as samsara, meaning perpetual wandering, and describe the transition like a billiard ball hitting another billiard ball. While nothing physical transfers, the speed and direction of the second ball relate directly to the first. So the term most often used is rebirth, rather than reincarnation. Reincarnation implies the transfer of an essence, or a soul, while rebirth follows the law of causality, or dependant origination, where this arises because of circumstances which happened before. Denying the existing of rebirth does not obstruct others, it only limits our own life. Without rebirth, there is no past and there is no future. A life without future, existence is so short and vain. The future is so hopeless. When we face a great obstacle, we can encourage ourselves, 'It is okay, another ten years then it will be my turn.' Even when criminal steps on the execution chair, they can still say, 'Another twenty years, there will be another tough man'. With rebirth, human existence has maneuvering rooms. With rebirth, pledge and wish can eventually be fulfilled. With rebirth, life has the next train available. 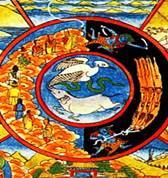 Reincarnation
Life is suffering. You can never really achieve peace. Happiness is just the flip side of sadness and no material or emotional pleasure will sustain the longing in your soul to understand itself. Reincarnation" normally is understood to be the transmigration of a soul to another body after death. Based on his no-soul (annatto) doctrine, the Buddha described reincarnation or the taking on of a new body in the next life, in a different way than the traditional Indian understanding. He compared it to lighting successive candles using the flame of the preceding candle. Although each flame is causally connected to the one that came before it, is it not the same flame. Thus, in Buddhism, reincarnation is usually referred to as "transmigration."
Nirvana
Buddhists believe people are continually reborn into this world, unless they have achieved liberation (freedom) from samsara (the continual process of birth, death and rebirth). The Buddha experienced samsara when he saw the effects of old age and sickness, leading to death. Freedom from samsara occurs when a person has reached nirvana (or nibbana).Nirvana literally means extinguishing or unbinding. The implication is that it is freedom from what ever binds you, from the burning passion of desire, jealousy, and ignorance. Once these are totally overcome, a state of bliss is achieved, and there is no longer the need the cycle of birth and death. All karmic debts are settled. The Buddhist religion lays emphasis on individual effort as means to achieve Moksha. The main point of focus in the Buddhism philosophy is Moksha. It says that the main cause of human sufferings is nothing else but the human beings themselves. It attributes the increasing and never ending human desire as the main factor that leads to pain and miseries. Thus, Buddhist philosophy preaches its people to detach themselves from the worldly pleasures and seek Nirvana that will ultimately pave way for salvation.
Karma

According to Buddhism, our lives and all that occurs in our lives is a result of Karma. Every action creates a new karma, this karma or action is created with our body, our speech or our mind and this action leaves a subtle imprint on our mind which has the potential to ripen as future happiness or future suffering, depending on whether the action was positive or negative. If we bring happiness to people, we will be happy. If we create suffering, we will experience suffering either in this life or in a future one. This is called the Law of Karma, or the Law of Cause and Effect. Karmic law will lead the spirit of the dead to be reborn, in realms which are suitable appropriate to their karmic accumulations. The way we pass reflects the way we lived our lives, a good death putting a good stamp on a good life. As Leonardo Da Vinci once wrote in his notebook; Just as a well spent day brings happy sleep, so a life well spent brings a happy death. If we have lived a life of emotional turmoil, of conflict selfish desire unconcerned for others, our dying will be full of regrets, troubles and pain. It is far better to care for the lives for all around us rather than spending a fortune in prolonging life or seeking ways to extend it for those who can afford it, at the expense of relieving suffering in more practical ways. Improving the moral and spiritual quality of life improves its quality for us all rather than the selfish individualism that benefits the elite few who draw most resources.
Heaven and Hell
According to Buddhism if a human does not obtain nirvana or enlightenment, as it is known, the person cannot escape the cycle of death and rebirth. In Buddhist literature, it is stated that persons who have reached the Devalokas would develop an aloofness from wordly attachments. However, liberated souls living in the higher heavens could come down to earth and communicate with spiritually advanced people. The plane immediately below the human is that of animals and below it is other planes Niraya, Asura and Peta which are described as unhappy states of existence. Beings are born Petas as a result of greed and attachment to their worldly belongings and are drawn to the place of attachment.

Buddhism tells of many hells, of which Avici is the most terrible. They are of course all temporary and therefore purgatories rather than places of eternal punishment and the beings that inhabit them have the power of struggling upwards and acquiring merit, but the task is difficult and one may be born repeatedly in hell.

The phraseology of Buddhism calls existences in heavens and hells new births. In Buddhism there are 37 different levels of heaven where beings experience peace and long lasting happiness without suffering in the heavenly environment.