Death is the one thing in life we can be sure about and that is why religions have beliefs about what it means! Everything else 'might' happen to us: we might get married, be rich, be happy, have children, open our own business or travel the world, but the only real certainty is that we will die.

The major western religion Christianity has borrowed heavily from the Egyptian model of what happens after death. The idea of final judgment, physical resurrection and heaven being a garden with a river running through it, are all ideas borrowed from the Egyptians. We must also remember that man's life is in God's Hands. 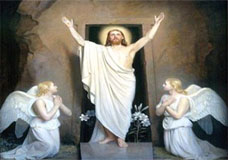 Only He determines the moment of death and the destiny of every soul on separation from the flesh. For this reason, attempts to produce experiments in this field are in conflict with the Will of God and bring the experimenter into contact with the fallen spirits of that world. Christians believe fervently that there is a life after death on earth. While the actual nature of this life is not known, Christians believe that many spiritual experiences in this life help to give them some idea of what "eternal life" will be like.

Christianity has historically taught that everyone has only a single life on earth. After death, an eternal life awaits everyone either in Heaven or Hell. There is no suffering in Heaven; only joy. Torture is eternal without any hope of cessation for the inhabitants of Hell. The overwhelming majority of mainstream Christian denominations rejects the notion of reincarnation and considers the theory to challenge basic tenets of their beliefs. In standard Christian theology, the soul is an individual entity which is totally separate from other souls and (can become) totally separate from God.

There is thus one God (or maybe three depending on how you interpret the Trinity) and a plurality of souls. Every person has exactly one soul. In the Genesis version, as believed by 'young earth' creationist theologians, humans were created on the Saturday of the first week, after God had created land, sea, stars, planets, birds, beasts fishes etc during the previous Monday to Friday. Since only humans have souls, all these features existed quite concretely in the absence of observers. In contrast, theologians who believe in evolution subscribe to the 'soul-injection theory', which states that "There came a moment in the evolution of hominids when God intervened and injected a human soul into a previously animal lineage.

All the features of the world existed in the absence of souls, in this case for many hundreds of millions of years rather than one working week. So, to the Christian, reality is totally objective and souls have no part in determining the existence of the real world. If Jesus is the only way to God, it is because the salvation of the person, body and spirit, is a hope profoundly different from all other religious hope. It gives a new dimension to salvation not found anywhere else. Spiritual life is walking after the spirit by the Spirit, focused on the spirit, exercising and strengthening our spirit, substantiating things unseen. Such is the life, in Christ Jesus, the only help that could ever work, authentically, for us helpless sinners in achieving victorious life: with Christ, Christ in me, and for Christ.

Resurrection means to return back in the same physical body with the same face. Hence the practice of burial, preserving the body and burying it to be resurrected at the end of times. Rebirth is when a soul which resides in a human body returns back to another human body after the previous body's death. Now to begin with no one knows what happens to the soul after it leaves the body, so for argument's sake, for a soul to return, it requires a body which can sustain it, which evidently is not a rotten corpse which is nothing but decayed bones, whereas a newborn or a foetus is much more apt for a soul to make it its dwelling. So from a rational point of view isn't it more appropriate for a soul to take rebirth rather than claim the old rotten body it once used to reside in. Belief in the resurrection of the dead, and Jesus Christ's role as judge of the dead, is codified in the Apostles' Creed, which is the fundamental creed of Christian baptismal faith. The Book of Revelation also makes many references about the Day of Judgment when the dead will be raised up. However, there are also many Christians who do not believe that individual consciousness continues after death, and a higher number who do not believe in a place or condition of eternal punishment for sins.

Christians believe there is an afterlife. Christian views of the afterlife generally involve heaven and (somewhat less frequently) hell, with Catholicism adding an intermediate realm of purgatory. Except for purgatory (whose denizens will ultimately enter heaven, after "purification"), these realms are usually assumed to be eternal. Although the body dies and is buried or cremated, they believe that their unique soul lives on and is raised to new life by God. Christians believe that God is just and fair, and so cannot let evil go unpunished. Most believe in the idea of judgement after death, and that God will treat people in the afterlife according to how they lived their life on earth. Historically, Christianity has taught "Heaven" as a place of eternal life, in that it is a shared plane to be attained by all the elect. Roman Catholics believe that entering Purgatory after death cleanses one of sin period of suffering until one's nature is perfected, which makes one acceptable to enter heaven.

This is valid for venial sin only, as mortal sins can be forgiven only through the act of reconciliation and repentance while on earth. In Protestant Christian sects, eternal life depends upon the sinner receiving God's grace through faith in Jesus' death for their sins, see atonement, his resurrection as the Christ, and accepting his Lordship authority and guidance over their lives. If the soul could satisfy the gods, "the soul was straightway gathered into the fold of Osiris. But if it could not, if it was found wanting when weighed in the heavenly balances, then it was cast into a hell, to be rent to shreds of the 'Devouress.' For only the righteous souls, only the guiltless, were thought to be deserving of life everlasting. The concept of heaven and hell in traditional Christianity heavily depends on the doctrine of the immortality of the soul. The Bible is even less specific about hell, and Christians have very different ideas about this too. Some Christians believe that hell is a place of suffering, and of separation from God. Others (perhaps most) believe that hell is a spiritual state of being separated from God for eternity.

The word Salvation signifies deliverance from actual trouble or threatening danger. Salvation is the gift of God given by a covenant with man where God acts by grace to save man from the slavery and evil effects of sin. Only in Christianity is this path of Salvation made clear by God's covenant with man through Jesus Christ who is the sacrifice of God for the sins of the whole world. Christians believe that salvation was made possible by the sacrificial death of Christ by crucifixion 2,000 years ago.

The word atonement, one of the few theological words of English origin, is used to describe this concept.

The verb "atone" derives from the adverb "at one," and therefore means "to reconcile." The notion of deification (Theosis in Greek) is based on the perspective that when Christ was incarnate in the man Jesus, he did take on just one human nature, but all of human nature.

He thus made it possible for the reverse to occur - for humans to participate in the divine nature. "The Son of God, as the one through whom the process of creation was fulfilled, came down from heaven into the world and became fully man.