Confucianism's focus is primarily on secular ethics and morality. As such, it is tied up with moral, social, political, philosophical, and religious thought. Redemption isn't the main focus of this religion. They each have their own precepts on what it deems important towards society and spiritual growth as a person (ethics and morality for Confucianists).

Therefore, Confucianism does not lay too much emphasis on death. To realize one's idea, one can "end one's life for benevolence" and "give one's life for righteousness." This thought once exerted profound influence on China's literati and officialdom in feudal society. 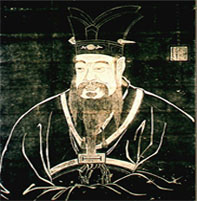 Since Confucianism deals primarily with moral conduct and the ordering of society, it is often categorized as an ethical system rather than a religion. Although Confucianism deals solely with life here on earth rather than the afterlife, it does take into consideration mankind's ultimate concerns. One must remember the outlook of the people during the time of Confucius. Deceased ancestors were thought to exercise power over the living, sacrifice to heaven was a common occurrence, and the practice of augury, or observing the signs from heaven like thunder, lightning, the flight of birds, etc.Confucius does not here deny an afterlife: he was too respectful and reverential. He simply insisted that a good man practices good not for rewards now or later on, but for the sake of the good life itself.

Confucius did not focus on life after death as though it were the ultimate standard against which to measure the success of a life on earth. Death did not mean annihiation and loss in some great void beyond the grave. Confucius clearly believed in some form of spiritual survival, and in the ongoing presence of those who have departed this life. Confucianism was convinced that human beings understood far too little of life here and now to waste it planning for a hereafter they understood even less. When Confucian sources talk about heaven thereafter they do not have n mind anything like a realm of eternal reward for those who die in a state of righteousness.

Heaven is merely a name for the highest spiritual presence of which human beings are aware. Confucianism the dilemma of the doctrine of retribution was solved by extending retribution to the individual soul, which continued to live n another form once t had been separated from the body at death. Whereas vertical retribution means the punishment of the son for the sins of the father in the world. The concept of retribution for the soul after death refers to the punishment o the same individual for sins he committed when alive. Though body and soul are separated after death, the soul continues in existence in another form and is punished for sins committed when body and soul were united. According to this concept, it is the non material or spiritual element in man that is fulcrumincuding his actions toward good or evil. Thus in explaining the ways of Heaven to man, Confucianism emphasized the doctrines of vertical and hormonal resposibility, which focus on physical existence of man in this world and on the biological inks between one generation and the next.

There are certain theories which talks in terms of transcendence.Accordingly; Confucianism is not about a belief in life after death although for many Confucians, such an existence is held to be true. Transcendence is linked to the relationship between Man, Tian and Nature. This three-fold relationship is integral to Confucian transcendence. In order for human beings to become truly one with the cosmos and 'ren', virtues must be self-cultivated and extended to others. The power of 'ren' is the power to change human beings from their secondary capability to do badly, and to bring them up to their primary accomplishment - the power to do good and the power of human love. Life after death is very much a secondary consideration, but there is a common consensus that human spirits do go onto exist after death itself.

However, Confucius taught us to not place any great emphasis on this - he said that our lives and our purpose should be aimed at becoming 'sages' and to share in 'ren'.For instance, in discussing life after death, Confucius said "Respect the spirits, but stay away from them". At the same time, he promoted ancient religious rites such as the worship of heaven, the honoring of the Emperor, the commemoration of great men, etc. Likewise he taught that ancestral rites should be practiced since filial piety is the basic virtue because one should remember the origin of life. He apparently encouraged the building of temples to noted men, and thought seasonal rites should be performed to them as signs of respect and veneration. To understand the total dimensions of Confucianism as a religion, it is important to see Confucius shifting the emphasis from Heaven to Earth without dropping Heaven out of the picture entirely. The emphasis in Confucianism was on the earthly, not the heavenly; but heaven and its doings were assumed to be real rather than imaginary.

When one speaks of heaven and the afterlife, one must address the many issues and questions dealing with the soul. In both Western and Eastern religions, there is a predominant emphasis on acting "selfless" during life on earth, alluding to the fact that there is no personal soul after the brain dies. The self is only temporary - nothing of the individual prevails after death." Consciousness as an epiphenomenon of physical and chemical processes taking place in the brain - and all fail utterly. They fail not because their models are insufficiently accurate or detailed, but because they are trying to do what is, from the outset, impossible." There is no self; one is what one's brain and consciousness tell one. But according to most Chinese thought, a soul does exist, and in many cases there is a need for two or three of them. Upon death, one undergoes judgment for good and bad actions done during life on earth, one stays at the grave and one "goes into the ancestral tablet.Lao-Tzo, a follower and preachers of the Tao, also thought to be a contemporary of Confucius as there is no proof of his existence, had no faith in physical immortality or the endurance of the personal soul. Derk Bodde states that humans have two souls: the hun and the p'o.

The hun is the soul that leaves the body but is later compelled to return by a family member. The p'o eventually makes its way to the underworld and represents the dead's raw energy. In Chinese religion, reincarnation does occur: the dead are absorbed into the earth for a period of time and then returned always into the same family as a newborn." Every birth seemed to be the reincarnation of a forbear." Spiritualism combined elements from a variety of different religions, but their primary focus was "scientifically" proving survival after death through direct communication of mediums. While Spiritualists chose not to subscribe to a number of Christian doctrines, including the last judgment and the resurrection of the physical body, they did believe in the continuation of the personality after death, which was considered to be reborn in a spiritual body." At death the soul, which is composed of a sort of subtle matter, withdraws itself and remains near the earth plane for a period of time. After this, it advanced in knowledge and moral qualities and proceeds to a higher plane, until it eventually reaches the sphere of pure spirit."

Confucianism does not believe in the Hereafter, Paradise or Hell, nor does it accept any belief in Resurrection. Confucianists are mainly concerned with improving their life affairs with no regard for the destiny of the soul after leaving the body. One of the disciples once asked Confucius about death, Confucius answered succinctly: "We haven't yet finished studying life to delve into the question of death." The spirits of the ancestors are also consecrated by the Chinese: They believe in the immortality of these spirits and that they never die with the death of the bodies. The sacrifices offered to these spirits are given at celebrations where large banquets are extended, accompanied by music to help the spirits rejoice and feel happy. In every house, there is a small temple for the spirits of the dead and the gods of the householders. Confucianism regards both life and death as a responsibility to society.

The fundamental concept of the Confucian view of life and death is: "Life and death are determined by fate, and wealth and nobleness are determined by heaven," thereby emphasizing life rather than death. Confucius once said, "How can one know about death before he knows clearly about life?" In one's lifetime, one should fulfill one's responsibility in realizing the ideal of a harmonious society.

"It is man who can find and develop ways and ideas, and not vice versa." Man should consider it his duty to testify to the workings of the "way of heaven." Heaven pursues its eternal movement, and a gentleman should make unremitting efforts to improve himself." Since Confucianism lays more emphasis on responsibility in one's lifetime, it neglects the world after death. This "immortality," in spirit only, has social and ethical significance, but has not direct connection with life.