Jainism believes that all people are caught in an endless cycle of birth, death and rebirth. Jainism stresses detachment from the world and austerity. It abhors violence of any kind against both humans and animals and emphasizes Ahimsa - non-violence. Re-incarnation and the doctrine of karma are important precepts in the religion.

The Jains venerate, but do not worship, the Tirthankaras, the 24 religious leaders who are believed have attained Moksha - release from the cycle of death and rebirth. In Jainism death leads ultimately to the liberation of the soul into an individual state of total knowledge and bliss, although this process may take several cycles of death and rebirth. The only way to break this vicious cycle is to accumulate good karma or credit for good deeds. Hence, great emphasis is placed on charity, on-violence and benevolence. 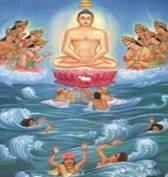 Jainism is based on a single idea, that the transmigration of souls is caused by the union of the living with the non-living which then sets up energies, or tapas, which then drive the cycle of birth and rebirth, or samsara. This endless process can be stopped if the energies are used up in a life of discipline. At the end of the process, the soul, freed from the cycle of birth and rebirth, then exists in a state of infinite bliss, knowledge, power, and perception-the soul which has achieved this state is siddha-paramesthin. There is a slightly lower stage of the soul, called the arhat-paramesthin, and the arhat is the one who teaches the rest of humanity.

This teacher is called the tirthankara, or "ford crosser," and serves as a vehicle of revelation for the rest of humanity. Like the Islamic rasul , each tirthankara is more or less a founder of a new religion. There are four categories of souls: gods, humans, demons, and animals; each soul in the infinite cycle of birth and rebirth can enter any of these categories. Moksha occurs only when the soul becomes freed from the cycle of birth and rebirth. The departure of the soul at death is part of a Jain worldview in which the concept of a living soul is thought to exist in all human beings, animals, insects, and vegetation, and even in the earth, stone, fire, water, and air. The distinctive Jain respect for life and refusal to kill animals, insects, and plants for food arises from this worldview.

Like all Indian religions, Jainism upholds the universal law of Karma. According to this law, every action - thought, word or deed - produces an effect, which in turn serves as the cause of another action, and so on. This chain of cause and effect is known as `Karmic Bondage' or simply, Karma. And because Jainism, as we have seen, subscribes also to the doctrine of transmigration and rebirth, it follows that the state of the soul at any given time is due to the Karma accumulated over countless ages. However, the Jain doctrine of Karma is distinctive. Selfish, careless and cruel actions lead to the accumulation of heavy Karma which weighs the soul down. But the Karma accruing from good deeds is dissipated almost immediately and has no serious effects. Moreover, suffering willingly under taken has the effect of dispersing the Karma already accumulated, so helping to lighten the soul. To achieve salvation (Moksha) man must therefore free his soul from matter. Thus freed, its natural lightness will float it to the top of the universe to dwell there for ever in all-knowing bliss. The souls of heroes like Mahavira virtually achieve salvation in this life. It is only residual Karma which binds them to the earth, but when that is exhausted through fasting and penance, they rise immediately above the highest heavens of the gods to the eternal rest of nirvana.

From the basic principles of Jainism it is evident that the inherent powers of the soul are crippled by its association with Karmic matter and that is why we find every person in an imperfect state. The real and everlasting happiness will be obtained by a person only when the Karmas are completely removed from the soul and Jainism firmly believes that even though man is imperfect at present, it is quite possible for him to rid himself of the Karmas by his own personal efforts without any help from an outside agency. The highest happiness is to escape from the Cycle of Births and Deaths and be a liberated soul, that is, to obtain Moksha. Self-control (vratae) is vital for attaining Keval Gyan and eventually moksha or realization of the soul's true nature.Jains believes all souls are equal because they all possess the potential of being liberated and attaining Moksha.Moksa and Nirvana are not the same. Nirvana is when the soul is passed from one body to another.

When a soul (atman) achieves Moksa, it is released from the cycle of births and deaths, and achieves its pure self. It then becomes a Siddha literally means one who has accomplished his ultimate objective. Attaining Moksa requires annihilation of all karmas, good and bad; because if karma is left, it must bear fruit. The world's scriptures describe Heaven as a place of rest, or as an exalted spiritual state, full of divine splendor and communion with the Absolute. There are also descriptions using more graphic and materialistic imagery: gardens of delights, with riches and pleasures abounding. Jainism describes heaven as the World to come there is neither eating nor drinking, nor procreation of children or business transactions, no envy or hatred or rivalry; but the righteous sit enthroned, their crowns on their heads, and enjoy the luster of the Divine Splendor (Shechinah).