While the preservation of life in Judaism is of paramount importance, taking precedence over nearly all other priorities and observances, death is not therefore abhorred or devalued. Instead, death is seen as a part of life and a part of God's plan. The extensive mourning rituals in Judaism do not indicate a rejection or protest of death, but demonstrate the great value Judaism places on life in general and the life of each individual person.

After death, there is only a spiritual (not a physical) world, according to Judaism. Our bodies turn to dust, but our soul (neshama in Hebrew) is eternal. If we lived a good life, we are rewarded with a spiritual closeness to God in the afterlife. If we sinned in our life, we are punished after death by a spiritual detachment from God. 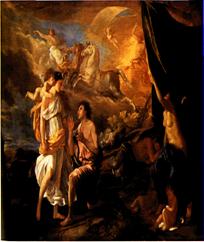 Belief in the eventual resurrection of the dead is a fundamental belief of traditional Judaism. The souls of the righteous are reborn in to continue the ongoing process of tikkun olam, mending of the world. Some sources indicate that reincarnation is a routine process, while others indicate that it only occurs in unusual circumstances, where the soul left unfinished business behind. One of the rewards that became a staple in Jewish belief was a belief in resurrection. It could be that this is one of the ultimate rewards. While this was one of the main points of Jewish belief, the nature of resurrection is far from clear throughout Jewish history.

This resurrection of the death does not appear to be an individual phenomenon, something to happen to each and every person separately. Rather, they slowly began to envision a sort of a general resurrection of the death. On the other hand, another staple of Jewish belief which was just as crucial was the belief in the ongoing existence of the soul. That is to say, the soul does not perish with death. This, as opposed to resurrection, appears to be understood on an individual basis. Each and every person has a soul, and upon that person's dead, that soul is removed or moved to some sort of celestial courthouse, where it will be judged to either perdition or reward. After a person's death, the first stage would be the afterlife of the personal soul of that person. This would be followed by a Messianic era in this world on earth. The third stage would be some sort of a general resurrection of the dead.

The Torah emphasizes rewards and punishments in this life, however, one can find in the Torah evidences of the afterlife, when the righteous will be reunited with their loved ones after death. Judaism is not focused on the question of how to get into heaven. Judaism is focused on life and how to live it. However, during this life Jews prepare for the Olam Ha-Ba through Torah study and good deeds. "This world is like the eve of Shabbat, and the Olam Ha-Ba is like Shabbat. He who prepares on the eve of Shabbat will have food to eat on Shabbat." The Talmud also states that all Israel has a place in the Olam Ha-Ba.The spiritual afterlife is referred to in Hebrew as Olam Ha-Ba (oh-LAHM hah-BAH), the World to Come, although this term is also used to refer to the messianic age. Nevertheless, we definitely believe that your place in the Olam Ha-Ba is determined by a merit system based on your actions, not by who you are or what religion you profess.

If a person spends their lifetime elevating the soul and becoming sensitive to spiritual realities (through Torah study), then that will translate into unimaginable pleasure in heaven. According to one mystical view, every sin we commit creates an angel of destruction (a demon), and after we die we are punished by the very demons that we created. Some views see Gehinnom as one of severe punishment, a bit like the Christian Hell of fire and brimstone. Other sources merely see it as a time when we can see the actions of our lives objectively, see the harm that we have done and the opportunities we missed, and experience remorse for our actions. The period of time in Gehinnom does not exceed 12 months, and then ascends to take his place on Olam Ha-Ba.

Karma is an idea that permeates many cultures.Divine Providence ("hashgacha") means that we can reach beyond the system. For example, the "karma" of Abraham and Sarah was such that they would not have children together. The Torah tells that God lifted Abraham above the stars and Sarah gave birth to Isaac. Similarly, the "karma" of his offspring was to be enslaved to Pharaoh. Again, divine intervention overrode that karma and they were miraculously freed. There is no dogma in Judaism about what awaits us after life in this world, but Jewish sages have speculated extensively and discussed two distinct, yet intertwined notions: spiritual immortality (the belief that each of us possesses a soul which continues to exist after our physical body dies) and resurrection of the dead (the belief that at some time in the future, time as we know it will end and God will resurrect the dead, restoring their bodies to previous health and vigor and breathing new life into them).

Spiritual Immortality and Resurrection of the Dead were ideas not original to Judaism, but they have been interpreted and woven into the fabric of Jewish life, and are an integral part of Jewish culture and thought.

Heaven is where the soul experiences the greatest possible pleasure - the feeling of closeness to God. Of course not all souls experience that to the same degree. It's like going to a symphony concert. Some tickets are front-row center; others are back in the bleachers.

Where your seat is located is based on the merit of your good deeds like giving charity, caring for others, prayer. A second factor in heaven is your understanding of the environment. Just like at the concert, a person can have great seats but no appreciation of what's going on. If a person spends their lifetime elevating the soul and becoming sensitive to spiritual realities (through Torah study), then that will translate into unimaginable pleasure in heaven.

The existence of the afterlife is not stated explicitly in the Torah itself, because as human beings we have to focus on our task in this world. Though awareness of an eternal reward can also be an effective motivator.