Paganism is the practice of a polytheistic religion. Polytheistic means more than one deity. Some pagans worship only one deity while still acknowledging the others and some worship an entire or pantheon or several pantheons. Most Pagans believe in life after death; in the existence of an Otherworld, in the existence of an after-life in one form or another, and in the possibility of rebirth.

On Samhain (Halloween) Pagans honour their ancestors by giving thanks and remembrance to those who have passed over into the Otherworld, a term used to describe the spirit-world, the place to which one goes after physical death. 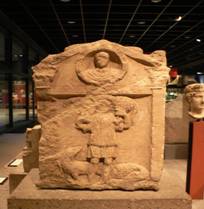 Paganism involves complex spiritual and magical systems centering on death and rebirth. Most pagans believe in reincarnation as opposed to single life. Some believe we are reborn continuously forever while others believe that we are reborn until will learn everything we need to learn for spiritual growth. Some believe we start out as plants or animals and progress to humans, while other believe animal and plant spirits are different entirely. Some pagans also believe that the soul rests in between incarnations. The individuality that survives life after death is not the accumulation of memories, capacities, and skills that makes up the individual during life. Rather it is the essence that lies behind and underneath all of those things. As we die we transition from that which is in the world, our thoughts, feelings, memories, and beliefs, to that which is not in the world, or essence. The Gods and Goddesses, along with many other traditional spirits, share that essential nature.

Wiccans, a group of pagans believe in karma and reincarnation. Some religions believe that when you die, your soul goes to either heaven or hell, depending on how much faith you had, or what kind of person you were in your life. Their God is the sole judge. But Wiccans feel you make your own destiny. The God and Goddess are always there to guide you in life, but they don't judge your soul, or make your actions. This is where karma comes in. Say you do something bad in your life. When you are reincarnated, or born again into another body in your next life, you will receive the same treatment that you did in your past life, only three times more.

The opposite is true if you do something good. So that means there is good karma, or bad karma. But no matter what kind of karma you get, you will learn from it, and be a better person! You decide what kind of karma you will receive- you make your own destiny. Pagans feel that when your body dies, your soul will eventually be born into another body. So where does the soul run off to in the meantime? Some feel that is goes to a spiritual realm where the Deities reside, until it's time to reincarnate. Others might feel that it wonders the Earth until it's time to be born again. But we don't feel that the soul will go to some tortuous realm with an evil master.

The God and Goddess will always welcome your soul, no matter what you have done in your life. They feel that karma will take its course in your next life. To believe in reincarnation, you believe that you'd return to the Earth after death to learn different lessons. We choose our own life lessons or path for every reincarnation - we choose a Path that would challenge us and our previous experience, so that can we grow and learn. Death of the physical body and the moving on of the soul / Higher Self is a journey, not the end. Physics tells us that energy can not be created or destroyed - it can only change from one form into another - and since we are energetic beings, the end of our physical body does not mean the end of our Soul and as a result only moves on to another form. However, we do not seek death; our life cycle will move on for us at its own pace until we've learned our lessons for this life and until its time for us to depart.

Pagans often hold a belief in reincarnation and what is commonly known as karma. Magical rituals are used as a means of honoring the God/Goddess and the nature of the universe. Pagans believe there are lessons set upon our path to help teach us about ourselves and to overcome the karma we've created in a past life or an earlier time in this life. Through that understanding we grow in enlightenment and wisdom. Karma is the result of previous acts or deeds, either in the past or in past lives. Many people for some reason think there is only 'bad' karma. But think about it, if you owe karma to someone, then someone is in a position to receive a karmic repayment. So there is both positive and negative karma. The soul experiences this karmic effect until it can detach (let go and let God) from the past life.

When this occurs the soul has reached At-one-ment. If the soul can't let go, it can rubber band itself back to the "conquered" life so to speak. So it is very important to learn how to accept, and let go. Karmic situations (especially negative karma) can not be avoided, and usually come with some degree of drama/trauma. These are the situations that give you physical, mental and spiritual concern, stress or grief. It is the resolution of karma that we travel the path to divinity. This is both repaying and receiving karmic debts and credits, as well as, the karmic situations our soul has taken on to learn lessons to advance our own spirit. Some Accepting the Divine Consciousness within and our connection to the Universal Divine Spirit, we learn to acknowledge, accept, take action and release the issue to clear karma. Pagans believe in re-incarnation and use a religion-neutral "Summerland" when speaking about the Afterlife.

Pagans don't believe in a Heaven and Hell as Christianity imagines it - where your salvation or condemnation is forced upon you regardless of your actions and solely on what your beliefs in God was during your life. Pagans believe that the results of our actions are very clearly important on this plane of existence so it can not be irrelevant in the Afterlife. Your faith has nothing to do with where you go in the Afterlife, only what you did. Unlike Heaven, there is no-one to deny us entry or judge us upon the actions we have performed in our past lives. However, our souls go before the "Divine Judge" but, that "entity" does not serve as your judge, s/he allows you to see YOURSELF truly and judge yourself. The highest thing that you've done in the life just past is the point of reference by which you measure your growth, progress and learning. Some souls that haven't had many lives and do not have as much to process and judge themselves on return very quickly. All souls who have determined that they need to return to the body will do so, when they are ready. There is generally no concept of hell as a place of punishment, but some believe wrongdoing can trap the soul in state of suffering after death. Some (Wicca) believe the soul joins their dead ancestors who watch over and protect their family. Some believe that life energy continues in some, if unknown, form. Some believe in various spiritual resting places. Many say we don't or can't know what happens after death. The concept of a defined afterlife where individual souls engage in some sort of activity, positive or negative, reoccurs throughout early Pagan religious and burial beliefs. According to Pagans are two concepts that you need to consider in assessing belief in life after death. One is dualism, that the soul or essence of an individual survives in some form after death. The second is one of identity, does the individual consciousness or identity survive after death, or does the soul merge into some form of super or over conscious. For Pagans death is a transition of spirit, a transition to a new existence, a new state of consciousness, but not a loss of individuality or consciousness.

Every soul can reborn many times into differing forms, so we can live many lives that are still ahead for us. Between our times of life we believe that our soul journeys to a place called the Summerlands before being reborn to a new existence on this Plane. The Summerlands is a place where we can rest, build up our strength and reflect upon the previous lives lessons. The Summerlands are all around us, we're only separated from those who've come before us by the boundaries of the different Planes of existence. A common theme is that all life is a circle, with life returning to death and back again as the God rises and dies through the year.

Thus reincarnation is seen as fitting into a Witch's concept of the Universe. Likewise an old theme in Witchcraft is the use of the fact that other belief systems believe in reincarnation. This fact is, somewhat mysteriously, used to justify and explain Pagan and Witch belief in reincarnation.

These are the themes often found in many popular neo-Pagan writings on death, that reincarnation reflects the circle of life; that other, usually Eastern, belief systems justify our belief in reincarnation; and the Summerlands are a temporary way-station in our circling back from death into life.