Literally meaning "the way of the gods", Shinto is the native religion of Japan. It is a form of animism which stresses the importance of harmony between humans and nature. It involves the worship of kami, which could be translated to mean gods, nature spirits, or just spiritual presences. Unlike many religions, one does not need to publicly profess belief in Shinto to be a Shintoist.

Unlike most Western religions there are no 'good' kami and bad 'kami'.There are rough, fierce, and violent kami but they are not intrinsically bad. Just as there are gentle, kind, sweet kami; that does not make them intrinsically good. 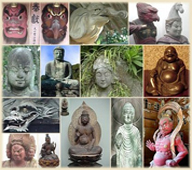 Every kami has a 'rough' side (ara-mi-tama) and a 'gentle; side (nigi-mi-tama), but you will not find a foil to God and Satan in them. Because of this there is no concept of the wrath of God or the separation of God from humanity by sin. The Kami are worshipped in various shrines but no statues are found in the shrines for it is believed that the Kami resides in the shrine itself so there is no need to have a representative of the deity. The general concepts concerning the afterlife are the belief that a person becomes a spirit-deity, and eventually becomes a part of a collective ancestral spirit. Even though an afterlife isn't heavily emphasized, a Hades-like realm, called Yomi, is briefly mentioned in the Nihongi and Kojiki within the creation story involving Izanagi no Mikoto and Izanami no Mikoto.

Custom dictates that a few decades after a person's death, their memorial tablet is thrown away and replaced with a pebble, and the collected pebbles from generations of doing this ritual represent the family guardian. This seems to suggest that people believe some sort of link is broken at that point - either that the soul finally leaves this world, or that it loses its individuality and becomes part of the guardian spirit. Shinto lore suggests the soul has multiple sections that can act and move around independently, so it may be that different parts have different afterlives - one being reincarnated, one becoming a guardian, etc.Christianity wants our souls free of sin before we die, to reach salvation in the next life.

Hinduism wants their followers to be good so that they are not reborn to a lower form of life. Buddhists want us not to have any attachments, so that we can reach Nirvana. The Shinto faith, on the other hand, wants all of us to not even focus on the afterlife. In fact, Shinto does not want us to even fixate on our death, which is in contrast with other religions. If one constantly focuses on death, then their fear and obsession will become such an attachment that one will not make the most out of life. Shinto understands birth as appearance from the invisible world to the visible world by the mystical power of life. And it regards death as disappearance or hiding from the visible world into the invisible world. Birth and this visible world are positive realities, while death and the other world are merely negative aspects of the former.

The primary goal of Shintoism is to achieve immortality among the ancestral beings, the Kami. All men are capable of deep affinity with the Divine. Salvation is achieved in Shinto through observance of all tapas (penance) and by avoiding people and objects that might cause impurity or pollution. A person's Kami nature survives death; therefore, fulfillment of duty is paramount to a Shinto being remembered with dignity after his death. Whenever a child is born according to a local Shinto shrine adds the child's name to a list kept at the shrine and declares him or her a "family child", called ujiko. After death an ujiko becomes a "family spirit", or "family kami" called ujigami.

One may choose to have one's name added to another list when moving and then be listed at both places. Names can be added to the list without consent and regardless of the beliefs of the person added to the list. However, this is not considered an imposition of belief, but a sign of being welcomed by the local kami, with the promise of addition to the pantheon of kami after death. Those children who die before addition to the list are called "water children",mizuko, and are believed to cause troubles and plagues. Mizuko are often worshipped in a Shinto shrine dedicated to stilling their anger and sadness, called mizuko kuyo.

Many Japanese have been detrimentally affected by the karma theory in its fatalistic aspect. But in general, Shinto's creative influences turned the Japanese mentality toward an inexpressive but potent conception that effects of the past can be overcome in the present by human effort creating a new karma. During any critical period in Japanese history karma was unable to check the spirit of creative action in Shinto taking command of the situation, but in quiet times karma tended to return. The lack of what happens after death is a continued debate even in today's present time. Unlike other religions one does not need to do anything to be considered a Shintoist.Shintoism has no precise definition of what happens at death.

(There is no equivalent of Christendom's "heaven" and "hell.") Although death is considered "a curse, a tragedy, a mishap," the prevailing thought is that the dead one becomes a spirit that can bestow blessings on a family. According to a Shinto book "The men of this world continue to live after death, and continue to receive the blessings of the gods, that is, the spirits of heaven and earth.

We also, with our incorporeal souls, live together this life of man." The search for Shinto-specific views of the other world begins with the study of myths contained in the Kojiki and Nihon shoki (kiki shinwa). These myths speak of a High Heavenly Plain (Takama-no-hara) where the various kami reside, but there is no connection between this realm and the dead.