Zoroastrianism is a simple compact faith with the right mix of spirituality, ethics and environment, a subject in which it was far ahead of its times. Most Zoroastrians rather refer to the concept of the after-life more in the patter of "we return to where we come from", death is the return to the world-as-one, and we are no longer separated from the world the way we must be as individuals.

Such a belief can be encompassed by monists and dualists alike.The word spirituality is derived from the term "spirit". "Spirit" has no size, form or weight and therefore, it cannot be described physically. Ahura Mazda, the Divine Fravashis and the Yazatas are Divine "Spirits" having no physical existence. 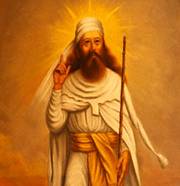 Their spiritual essence is present in material manifestation but the "Spirit" itself is beyond the physical. Like "Spirit", the Soul is the purely immortal, immaterial and divine principle which resides in the heart of man. Consequently, spirituality is the experience, the direct communion between two Divine Entities, the "Spirit" and the Soul. Anyone who has had a spiritual experience knows that such an experience cannot be described with mere words and that spiritual experiences are much more profound relative to the psychic ones.

The Gathas describes the main constituents of a human being as body (Tanu) and soul (Urvan), which live for only a limited time in the world. At the time of death, the body transforms (or perishes) and the soul goes on to live its second existence. Death has always been an enigma. From extant unearthed records, the Egyptians were perhaps the first civilized people to conjecture that after death, human beings existed somewhere and somehow. However, there is consensus that Zarathushtra was the first to introduce the idea of an afterlife that was based on morality, with rewards for the good and suffering for the evil. In the biblical period the Jews believed that the dead would continue to exist in a shadowy form in sheol, the abyss of the earth. The soul of a Zoroastrian, is judged at the Bridge of the Separator, at the dawn of the fourth morning after death.

The fate of the soul is decided depending upon the life it has led in this world weighed by all the good and bad, thoughts words, and deeds. The conscience comes in the form of a beautiful maiden to greet the soul, if it is potentially good, or the conscience comes in the form of an old and ugly hag if the soul is judged to be potentially wicked. The dualistic paradigm is amply reflected in the spiritual world, for the righteous soul glides into the "House of Song," while the wicked soul falls into the abyss of hell, "House of Deceit."

Zoroastrianism does not teach or believe in reincarnation or karma. There is no foundation for reincarnation in The Gathas or in the larger Avesta. The concept of reincarnation seems to have been adopted in India after the Iranian and Indian tribes were separated from each other. Zoroastrians believe that after life on earth, the human soul is judged by God as to whether it did more good or evil in its life. Those who chose good over evil go to what Zarathushtra referred to simply as the "best existence," or heaven, and those who chose evil go to the "worst existence," or hell. Zoroastrianism was one of the first religions to give the afterlife a moral dimension.

Zoroastrianism also believes in the progress of sacred time, and the eventual end of time. The belief is that the collective good acts of humanity will slowly transform the imperfect material world into its heavenly ideal. This is known as the "frasho-kereti," or "making-fresh," that is, renewal. At the end of time everything and everyone will be purified, even the souls in hell - so hell is not eternal. Zoroastrian ideas of moral dualism, heaven and hell, sacred time, and angelic beings have influenced Judaism and Christianity, during long centuries of contact between these faiths in the Middle East.

At any rate the goal of our human life has been unequivocally set forth by the Prophet-and that is to tread the Path of Asha, and along it to reach our God. This can be achieved by several methods, - through Knowledge, through Devotion or through Action. There are hints about all these three ways scattered through the Avesta; but the method emphasized is that of Action. Zoroastrianism is above all a religion of Action-Karma Yoga, to use the Hindu phrase. The Message of the Teacher is mainly concerned with action-right action which will help the Good Spirit and defeat the Evil One. The whole Teaching has been compressed into three commandments-Humata, Hukhta, Huvarshta (Good Thoughts, Good Words, Good Deeds). And though, as necessarily, thoughts come first, as the roots of all action, still Good Deeds constitute the chief qualification in treading the Path of Asha. God has given us powers and abilities in order that we may act, that we may become fighters in the ranks of 'the followers of Asha'.

As in other religions, descriptions of the heaven and hell in Zoroastrianism present contrasting pictures. The heaven described as is a pleasant place, filled with the radiance of god and great comforts. The hell is a dark world, where souls are subjected to intense agony by the creatures of Ahirman, who takes great delight in the suffering of the souls.

Zoroastrianism describes the heaven as lofty,exalted,supreme,most brilliant,fragrant,pure,filled with beautiful existences, most desirable and most good which is the place and abode of the sacred beings where is found all comfort,pleasure,joy,happiness and welfare, better even than the greatest and most supreme welfare and pleasure in the world. The hell is a place of chaos. In it there is no comfort, pleasantness, or joy but stench, filth, pain, punishment, distress, profound evil and discomfort. So much more grievous is the evil in the hell than even the most grievous evil on earth and more grievous is the terror of the punishment on the soul than that of the vileness of the demons on the body.

There the sinful soul is punished by the wicked demons and darkness, the head of who is Ahriman the deadly.The hell is a place of chaos. In it there is no comfort, pleasantness, or joy but stench, filth, pain, punishment, distress, profound evil and discomfort.

So much more grievous is the evil in the hell than even the most grievous evil on earth and more grievous is the terror of the punishment on the soul than that of the vileness of the demons on the body. There the sinful soul is punished by the wicked demons and darkness, the head of who is Ahriman the deadly.