Home   Death Meter   Death   Things to do before death   Mormonism

THINGS TO DO BEFORE YOU DIE - MORMONISM

The Mormon religion was founded by Joseph Smith around 1830 in the United States of America. It is a fast growing religious movement which claims more than 12 million adherents worldwide as of 2006.Mormonism spreads primarily through its worldwide missionary efforts - good young unmarried Mormon men are required to do two years missionary service.

There are other recommendations for women and for those who have finished with child rearing responsibilities. Mormonism appeals to many on the basis of its appeal to strong family values. But when you look deeper into this mysterious and fascinating religion, you will find all kinds of bizarre practices and beliefs.

Mormonism now teaches that God was once a man, and that man may become a God (through Mormonism, of course). This contradicts the book of Mormon itself, but Mormons don't really follow what the book of Mormon says anyway. Mormons are taught that God the Father is now on a planet near the star Kolob with his wives having spiritual children. Since the early 1990s, the Mormon Church has surpassed 13,000,000 members worldwide. Much of this growth occurs in South America and Africa as well as in the countries of the former Soviet Union, especially Russia. More Mormons live outside the United States than inside it by the late 1990s.

THINGS TO DO
Baptism

Baptism by immersion is the term The Church of Jesus Christ of Latter-day Saints (Mormon Church) uses to describe baptism in which a person's entire body is put under water and then brought back up. In fact, in the Mormon faith, unless every part of the body (including hair) goes under water the baptism is not valid, and must be done again to reach the divine God. People must be spiritually clean and worthy in order to live with God. Through repentance and baptism a person is forgiven their sins and made pure enough to live with the Lord.

Baptism is laid down in the fourth Article of Faith of the Church. Children, and adult converts go through the same ceremonies. Being submerged and rising out of the water is a symbol of the person's faith in the death, burial and resurrection of Jesus Christ. It also represents the death of the person's old life and their new birth to life in Christ. Immediately after baptism the person is confirmed into the church by prayers and the laying on of hands, when they get the gift of the Holy Ghost (also called the Baptism of Fire).Mormons regard the gift of the Holy Ghost as a spiritual compass that will guide them through life. Before a person can be baptized they will be interviewed, usually by the local Bishop or equivalent official, to make sure that they have repented of their sins, have faith in Jesus Christ, and understand and are willing to obey the laws of the gospel.

Baptism for the Dead 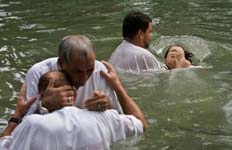 Mormons believe that baptizing an ancestor or the dead who died without hearing the true gospel as restored by the Church is a demonstration of their love for that person. In the Mormon rite of baptism for the dead, a living person acting as a proxy is baptized by immersion in typical Latter-day Saint fashion. The ordinance is performed only in temples for they believe the presence of the divine god there. The prayer accompanying the baptism differs from typical wording in that it states that the baptism is being performed for and in behalf of a deceased person whose name has been submitted for that ordinance. Any member of the Church who is at least 12 years old may be baptized for the dead. Young men must hold the priesthood.

Baptism for the Dead allows this saving ordinance to be offered to all those who have previously passed on without having heard of the Gospel of Jesus. If baptism is a required ordinance, as Mormons believe is evidenced by Jesus's own desire to receive it from John the Baptist, then this ordinance becomes a burden for all those who wish to spread the Gospel with all the inhabitants of the earth who have previously passed on to the afterlife. Mormons say that this is a fundamental error. No-one has to accept a proxy baptism. Just as the soul in paradise has a free choice to accept or reject the true gospel, they have a free choice to accept or reject the baptism. If they choose to accept the gospel, the proxy baptism means that they are fully equipped to move on in their spiritual life.

Funeral
Death is just part of life. It is not a beginning and end, but the same as birth, a birth into a new life. A Mormon funeral is not a final goodbye, but more like the farewell said to someone who is going away for a long time to meet the divine God to learn the spiritual value. The funeral consists mainly of a eulogy, or series of them, by people who knew the deceased well. The funeral is considered a celebration of the deceased's life. Many non-members of the Mormon Church will be in attendance, as it is open to all friends and family of the deceased. There is a special Family Prayer held for the family before the formal funeral.

Cremation is discouraged, as it is believed to be disrespectful to the body, and the grave is consecrated as the body's final resting place. If people don't get the chance to convert to Mormonism in this life, or they decided not to, they can have that option in the afterlife. A service is performed in the temple for someone already passed which gives them the option (in the afterlife) of either accepting the offer to convert or rejecting it. There is always the option, and many will not take the option if they already denied it on earth, as Mormons believe that personality carries over into the afterlife as well.

Marriage
Marriage and family have an extra meaning for Mormons. They believe that that the family unit can continue beyond death as a conscious, loving entity, with the marriage partnership and parent-child relationships intact. They consider it to be a spiritual way of leading life. In the Mormon temple wedding ceremony, the man and the woman are joined "for time and eternity". The woman, during the ceremony, must tell the man what her temple secret name is. He does not tell her his. It is by this name, according to the Mormons, that the man will resurrect her IF she's faithful. In Mormon heaven #1, men will have multiple wives and create worlds.

These wives will make spirit children and work in the heavenly kitchens under their husband's direction (he is 'god' after all!). In the endowment ceremony, the men sit on one side and the women sit on the other side (of the room). The first oath is for the women to stand and take an oath to obey their husbands. Next the men stand and take an oath to obey 'god'. You'd love the film they show in the temple for this ceremony.

Finally, the husbands and wives meet. There is a symbolic embrace through a veil, a final review of the vows and pledges, and the veil is lifted, leaving the couple in an embrace. The wedding itself, that is, the "sealing" of the couple, is quite standard for Judeo-Christian sects--the couple kneels before an altar, they are advised on their duties as a couple by a leader of the temple, and they are wed. This last portion is also undergone when a couple is married by proxy, that is, when a living couple stands in for one that has passed on, to ensure that they are sealed together in the afterlife. Afterward, couples often choose to have a more public "ring ceremony," outside of the temple, for friends and relatives who could not attend the temple ceremony. 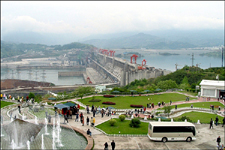 A Mormon's most secret and cherished possession should be his "New Name" which he receives during the Temple Rituals. This is the name by which he "will be called forth on the morning of the First Resurrection" by his God and by which he will be known throughout Eternity. He receives this from a Temple Worker, in a whisper, as he is being helped into his new "magic underwear" for the first time, during his Temple initiation. Each time he returns to do Temple work he will go through these same rituals for a dead person, whose name he will carry through the entire ceremony on a little slip of paper, which he surrenders to the Introducer at the Temple Veil, before he enters the Celestial Room.

On these return visits he will normally by-pass the "Washing, Anointing, and Clothing in the Garment of the Holy Priesthood" rituals, and just receive the "New Name" in a little booth as he leaves the locker room on his way to the theatre type Endowment Rooms. The "New Name" is usually Biblical, such as Abraham, Moses, Seth, or Mary, Martha, Naomi, or they come from the Book of Mormon. Many Mormons are not aware that every person attending the Endowment on a particular day receives the same male or female "new name", or it's alternate. The alternate is given when the first given name of the person receiving the Endowment, deceased or alive, (not the proxy) is the same, or sounds very similar to the "new name". My son and I share the same "new name" of Enoch with the prophet Joseph Smith Jr. and probably millions of other living and dead Mormons. This ceremony is a must in Mormon religion before death because they consider it to be very divine way of attaining spirituality.

Mormonism can look good to sincere people who are untaught in the Scriptures. They have a well-oiled religious organization and an incredible amount of money to back it. They don't teach people all their strange beliefs until later on - especially after they are baptised.

If Mormon beliefs were widely known by all, that cult would have a hard time gaining any new converts. But they will continue to gain converts no doubt, as long as widespread ignorance concerning the Bible exists around the world, and people remain open to the deceptive religious spirits in this world which deceive people by a thousand and one methods of false religion.