Home   Death Meter   Death   Things to do before death   Sikhism

THINGS TO DO BEFORE YOU DIE - SIKHISM

The Sikh faith was founded by Shri Guru Nanak Dev Ji in the Punjab area, now Pakistan. He began preaching the way to enlightenment and God after receiving a vision. After his death a series of nine Gurus (regarded as reincarnations of Guru Nanak) led the movement until 1708.At this time these functions passed to the Panth and the holy text.This text, the Shri Guru Granth Sahib, was compiled by the tenth Guru, Gobind Singh.

It consists of hymns and writings of the first 10 Gurus, along with texts from different Muslim and Hindu saints. The holy text is considered the 11th and final Guru. Sikhs believe in a single formless God with many names, who can be known through meditation. 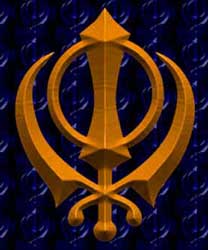 Sikhs pray many times each day and are prohibited from worshipping idols or icons. They believe in samsara, karma, and reincarnation as Hindus do but reject the caste system. They believe that everyone has equal status in the eyes of God. During the 18th century, there were a number of attempts to prepare an accurate portrayal of Sikh customs.

Sikh scholars and theologians started in 1931 to prepare the Reht Maryada -- the Sikh code of conduct and conventions. This has successfully achieved a high level of uniformity in the religious and social practices of Sikhism throughout the world.

THINGS TO DO
Diwali

On Diwali, it is customary for the Sikhs to light up their Gurdwaras and households with Deewe also known as earthen oil lamps or candles. In the early morning hours, Sikh pilgrims bathe in the holy tank of the Golden temple while reciting Japji Sahib. This is followed by the offering of prayers at the Golden Temple. For the Sikhs, Diwali is symbolic of the Sikh struggle for freedom so it considered as very essential ritual to be performed till their death. Since the time of Guru Nanak, the initiator of Sikhism, prevalent seasonal or folk celebrations akin to the harvest celebration of Vaisakhi, or ancient legendary festivals like Holi and Divali, or reverence ceremonies like Aarti, started to assume a new importance for the students of Guru Nanak.

The Guru utilized these celebrations and particular days for example the opening day of every lunar month, as the platform for his teaching themes. And hence the Sikhs were gradually distracted from obscurity of irrational ritualism based on apprehension and lack of knowledge to a progressive ideology based on rationale and faith in One Creator. The progressive principles of Guru Nanak added a new meaning to ancient festivals such as Diwali and Vaisakhi.

Every Sikh is under an obligation and is required to submit himself to the order of the Khalsa.Khalsa is an important ritual to be followed in a Sikhs life before ones death. This can happen at any age and anytime they feel ready to fulfill their religious duties without fail. This is a pledge to remain under control, governess of the Ultimate reality. Amritdhari is the honour of being a member of the Panth (a disciplined force of the God).Amrit is prepared by dissolving sugar crystals (Patashas-sugar plums) in water and stirred by Panj Pyaras with two edged Khanda to the accompaniment of scriptural recitation of five sacred Banis. Amrit is supposed to confer eternal life on the neophytes. Any person, who undertakes Amrit, is blessed with Naam Daan, humility, sweet nature and dedication to the service of mankind irrespective of caste, color and creed. Amrit turns pacificists into saint-soldiers and prepares them to die for a righteous cause and seek unity with Almighty Lord.

Some people are of the view that initiation may be administered to a boy or girl when he or she reaches an intelligent age. The ceremony ends with the eating of the ceremonial karah parshad. Parshad is a sweet tasting food which has been blessed. It is made from semolina, sugar and ghee. Historically speaking, Amrit is Nectar or holy water used to initiate the Sikhs into the order of Khalsa Brotherhood. It is cognate to ambrosia which means water of immortality. It is the elixir of life which bestows immortality. It brings the dead to life and makes human beings immortal. One who performs this external gesture without inner commitment to the ideas being expressed under philosophy of Amrit, is performing ritual. Without practice of the teachings in life and without cleaning inside and outside, such like initiation will be termed as ritualism. The Amrit Sanskar ritual is not external. The cleansing of the soul can only be done internally by the subject himself.

Nam Karan, Naming of a Child 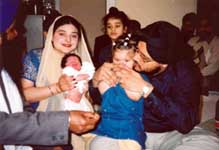 As soon as the mother and child are able to travel, the family visits the Gurdwara. There they recite joyful hymns from the Guru Granth Sahib to celebrate the birth of the new child. Karah Prashad (sacred pudding) is prepared by the family. Amrit (sweet water) is also prepared and given to the infant as well as the mother. The name is chosen by taking the Hukam, the granthi randomly opens Sri Guru Granth Sahib to any page and reads the hymn on that page. The first letter of the first word of the hymn is chosen. The child's name is than chosen beginning with that letter and is announced to the congregation. Naming is a very important ceremony in any religion because it is with ones name we call them till their death.
Funeral Ceremony
In Sikhism death is considered a natural process and God's will. Any public displays of grief at the funeral such as wailing or crying out loud is discouraged. Cremation is the preferred method of disposal, although if it is not possible any other method such as burial or submergence at sea are acceptable. Worship of the dead with gravestones, etc. is discouraged, because the body is considered to be only the shell, the person's soul is their real essence. The body is usually bathed and clothed by family members and taken to the cremation grounds.

There hymns are recited which induce feeling of detachment are recited by the congregation. As the body is being cremated, Kirtan Sohila the nighttime prayer is recited and Ardas is offered. The ashes are disposed of by immersing them in the nearest river. A non continuos reading of the entire Sri Guru Granth Sahib is undertaken and timed to conclude on the tenth day. This may be undertaken at home or in the Gurdwara. The conclusion of this ceremony marks the end of the mourning period. 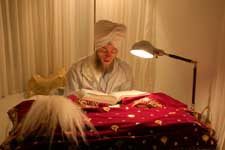 This is the non-stop cover to cover reading of Sri Guru Granth Sahib which is undertaken to celebrate any joyous occasion or in times of hardship, such as birth, marriage, death, moving into a new house, and Gurpurbs. So the ceremony of Akhand Path is celebrated by all Sikhs atleast once in their lifetime before death. The non stop reading takes approximately 48 hours and is carried out be family members, or professional readers in the presence of the family. The reading must be clear and correct so that it can be understood by all listeners.

After the completion of the reading the Bhog ceremony takes place. A Hukam is taken by randomly turning to any page and reading the hymn on that page. Karah parshad (sacred pudding) is also distributed to all present. This ceremony evolved in the mid 18th century when there were few hand written copies of Sri Guru Granth Sahib. Sikhs were fighting for their lives at this time and hiding in jungles. They would all gather to hear whatever portion of a reading that they could before Sri Guru Granth Sahib would me moved to another location for another audience. Performance of Akhand Path as a blind ritual is highly disrespectful to Sri Guru Granth Sahib and contrary to the teachings of the Gurus.

Bandi Chhor Divasi
On Bandi Chhor Divas 1619 the Golden Temple was illuminated with many lights to welcome home and celebrate the release of Guru Hargobind from imprisonment in Gwalior fort. Sikhs have continued this annual celebration with lamps being lit outside gurdwaras and sweets distributed to all. The largest gathering happens at The Golden Temple which is lit up with thousands of lights.
Anand Karaj

The Granthi will then ask the Bride, Groom and their parents to stand up. The rest of the congregation will remain seated. On their behalf, he will recite a prayer from the Guru Granth Sahib and ask for God's blessings on the proposed marriage.

The entire congregation standing for the reciting of Ardaas (prayer) concludes the marriage ceremony for the happiness of the newly married couple. The congregation will then resume their seats and the Granthi will read another verse from the Guru Granth Sahib dedicated to the occasion. Finally, the ceremony ends with Granthi opening the Guru Granth Sahib at random and reading a verse. After the conclusion of the ceremony, "Karah Prasaad" (sweet pudding), which is blessed food, is offered to all in the congregation. Their parents then congratulate the newly married couple. After the parents give their congratulations, those who wish may offer their congratulations to the couple at that time. Marriages are considered to be a means of discharging an individual's duty to the family before his or her death.

The Making of the Khalsa

The making of the Khalsa is a very important practice among Sikhs and is a must in their lifetime for they mainly consider only with practice of the five K's they attain a spiritual death. Guru Gobind Singh was the last Guru of the Sikhs in human form. He created the Khalsa, a spiritual brotherhood and sisterhood devoted to purity of thought and action. He gave the Khalsa a distinctive external form to remind them of their commitment, and to help them maintain an elevated state of consciousness. Every Sikh baptized as Khalsa vows to wear the Five "K's": more about 5 k's...

Thus Sikhism is a progressive religion well ahead of its time when it was founded over 500 years ago, The Sikh religion today has a following of over 20 million people worldwide and is ranked as the worlds 5th largest religion.

Sikhism preaches a message of devotion and remembrance of God at all times, truthful living, equality of mankind and denounces superstitions and blind rituals.

Sikhism is open to all through the teachings of its 10 Gurus enshrined in the Sikh Holy Book and Living Guru, Sri Guru Granth Sahib.