Home   Death Meter   Death   Things to do before death   Zoroastrianism

THINGS TO DO BEFORE YOU DIE - ZOROASTRIANISM

Zoroastrianism was founded by Zarathushtra (Zoroaster) in Persia which followed an aboriginal polytheistic religion at the time.

He preached what may have been the first monotheism with a single supreme god, Ahura Mazda.Zoroastrians belief in the dualism of good and evil as either a cosmic one between Ahura Mazda or an evil spirit of violence and death, Angra Mainyu, or as an ethical dualism within the human consciousness.

The Zoroastrian holy book is called the Avesta which includes the teachings of Zarathushtra written in a series of five hymns called the Gathas. 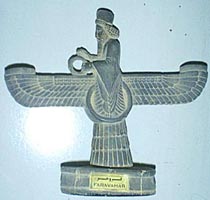 They are abstract sacred poetry directed towards the worship of the One God, understanding of righteousness and cosmic order, promotion of social justice, and individual choice between good and evil. The rest of the Avesta was written at a later date and deals with rituals, practice of worship, and other traditions of the faith. Zoroastrians worship through prayers and symbolic ceremonies that are conducted before a sacred fire which symbolizes their God. They dedicate their lives to a three-fold path represented by their motto: "Good thoughts, good words, and good deeds." The faith does not generally accept converts but this is disputed by some members.

THINGS TO DO
Navjote

Navjote is the induction of a child into the fold of the Zoroastrian religion. The word Navjote is made up of two terms: (1) Nao meaning new, and (2) Jot? meaning one who offers prayers. Hence the word Navjote has been interpreted to mean a new initiate who will offer Zoroastrian prayers. The Irani Zoroastrians use the phrase "sedreh-pushi" (which means putting on the shirt) for this ceremony. The Parsis (Zoroastrian of India) believe that a Zoroastrian child between the age of seven and fifteen must be invested with the Sedreh (shirt) and Kusti (girdle) which are the visible insignia of the religion. Among the Irani Zoroastrians age does not matter.

For the formal ceremony of admission of the child to the Zoroastrian fold, relatives and friends are invited. They bear witness to the declaration of the candidate's acceptance of the Zoroastrian religion during the ceremony when the child is invested with Sedreh and Kusti. The Navjote is an occasion for rejoicing, because a new worshiper has been added to the ranks of the Zoroastrians and it is an important ritual in their life before death.

The sacred shirt, called the sudre, and the sacred thread, called the kusti, is quite important to navjote ceremony. The sacred clothing signifies parental responsibility as well as responsibility for the one who is undergoing this ceremony. When the child wears the sacred clothes, it means the parents are now obligated to morally and religiously educate the child. If the child commits a wrongful act, it is their responsibility, as they may also take some pride in themselves when their child commits a righteous act. The sacred thread and shirt also teach the child responsibilities and duties before death, as they are to untied before certain practices, such as prayer, bathing, and before meals, and re-tied, shortly after the task is completed. The shirt has a construction extremely specific to this culture.
Zoroastrian funerals
Zoroastrians are famous for their tradition of exposure or 'laying out the dead'. In Mumbai the Zoroastrian 'Towers of Silence' have been a focus of interest because it is one of the few places in the world where this tradition can still is upheld. Zoroastrians believe that as soon as the breath has left it, the body becomes impure. Death is considered to be the work of Angra Mainyu, the embodiment of all that is evil, whereas the earth and all that is beautiful is considered to be the pure work of God. Contaminating the elements (Earth, Air, Fire and Water) with decaying matter such as a corpse is considered sacrilege. Instead of burying the corpse, Zoroastrians traditionally laid it out on a purpose built tower (dokhma or 'Tower of Silence') to be exposed to the sun and eaten by birds of prey such as vultures. In Mumbai, where more than half of India's seventy thousand Parsis live, huge towers have been built and set within fifty-seven acres of forest gardens. In western countries where exposure is either impractical or illegal, Zoroastrians usually opt for cremation.
Marriage

Parsi marriage is known as 'Lagan' and is conducted with great zeal and fervor. The customs and traditions observed in the Parsi marriage are quite different from others. The Parsi wedding rituals begin with Rupia Peravanu ceremony.This is the unofficial engagement between both the families. Ladies from groom's family visit the bride's house and gift her silver coins and shagun. This ceremony is repeated at the groom's house as the bride's family visits them. After this, Madhavsaro is observed. According to this, the families of the bride and the groom plant a tree in a pot individually.

This pot is kept at the entrance of the houses and watered everyday till the eighth day after marriage and then planted somewhere else. This is followed by the ritual of Adarni, wherein the groom's family visits the bride's place and gives her gifts like clothing and jewelry. The guests are treated with sev and dahi, boiled eggs and bananas. Just a day before the wedding Supra nu Murat ritual is performed. This ritual is similar to the haldi ceremony organized in Hindus. The groom and the bride are applied turmeric paste by five married women. Next is Nahan, in which the couple takes purifying bath after which they get ready for the wedding ceremony.

Wedding Rituals
For a Parsi wedding a stage is set in a baug or agiary, the Fire Temple. Here, before the groom steps on the stage, the bride's mother performs a ritual called Achumichu emphasizing the duties of a woman to her family before death. She holds a tray containing a raw egg, supari, rice, coconut, dates and water. She circles all these items, except water, seven times around the groom's head and throws on the floor. The water is thrown on either side. This is repeated by the groom's mother for the bride. This is followed by Ara Antar, in which the bride and the groom are seated facing each other, with a cloth in between. After this, the priest circles the couple with a string, seven times.

On the seventh round the couple is supposed to throw rice at each other from over the curtain. Whoever does it first, is supposed to rule the household. Now, the couple sits besides each other with the seven strands of string binding them. Oil lamps are lighted on each side and the priest begins prayer ceremony. This is followed by shower of rice and rose petals, after which the couple exchanges rings. This is called Chero Bandhvanu. Next is Haath Borvanu, in which the bride's sister puts groom's hand in a water glass, throws milk on his shoes and removes the seven strands binding the couple, in lieu of token money.

Post Wedding Rituals
Parsi weddings are renowned for their grand Reception party. It is an ideal opportunity to experience the culture, dance, music and food of the community, at its best. The dinner is lavish four course meal, comprising of all Parsi delicacies. The wedding comes to an end with the couple leaving for their home and the groom's mother once again performs the achumichu ceremony at their arrival.
The Tying Ritual
Zoroastrians untie and retie the kusti several times a day to reinforce their connection with Ahura Mazda and their faith and traditions. This is commonly done upon waking, after washing or using the toilet, before prayers, and before meals.The practitioner should always wash his hands before performing the kusti ritual. A prayer is said, the kusti is untied, another prayer is recited, and the kusti is tied. It is wrapped three times around the waist and tied twice, once in the front and once in the back. These knots bind the wearer to his practices.

The first knot is a reminder of Ahura Mazda's truth and righteousness, and also that Zoroastrianism is the true path to Ahura Mazda. The second knot represents Zoroaster is the true prophet, whose words are the rightful teachings of Ahura Mazda, specifically the ever-present call to embrace good thoughts, good words, and good deeds. The practitioner should always face the light when performing the ritual. In the morning one should face east and in the even should face west. In between those periods of time he should face south, while at night he should either face the moon or a lit lamp. Light is reminiscent of fire, and both light and fire are common symbols of Ahura Mazda and his goodness. 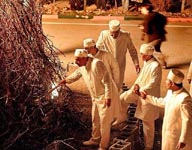 Fire is incorporated into a number of Zoroastrian rituals for it is believed to help the followers to attain a death without suffering. Pregnant women light fires or lamps as a protective measure. Lamps often fueled by ghee - another purifying substance - are also lit as part of the navjote initiation ceremony. The sacred fire must be kept burning continually and has to be fed at least five times a day. Prayers also are recited five times a day. The founding of a new fire involves a very elaborate ceremony. There are also rites for purification and for regeneration of a fire.
Festivals
Festivals, in which worship is an essential part, are characteristic aspects of Zoroastrianism, a faith that enjoins on man the pleasant duty of being happy. The principal festivals in the Parsi year are the six seasonal festivals, Gahanbars, and the days in memory of the dead at year's end. Also, each day of the month and each of the 12 months of the year is dedicated to a deity. The day named after the month is the great feast day of that particular deity.
Yasna
The chief ceremony, the Yasna, essentially a sacrifice of haoma (the sacred liquor), is celebrated before the sacred fire with recitation of large parts of the Avesta. There also are offerings of bread and milk and, formerly, of meat or animal fat. This is a very important ceremony in each ones life before death.
Bareshnum
The religion also holds purification rituals with the most important being called bareshnum, which is considered to be the most complicated. This ritual lasts for several days and involves a dog as one of the participants. The ritual is performed at a place that is considered special, where followers touch the left ear of the dog. It is believed that the gaze of the dog will send evil spirits to the air. Additional purification rituals include: padyab, or ablution, as well as nahn, or bath.

Like most ancient religions such as Hinduism and Judaism, the religion of Zarathushtra also, does not permit conversion and so one is born into the faith.

The Parsis and the Iranian Zoroastrians who are not more than 130,000, globally, have maintained their religious practices and their ethnicity over the millennium and have made an immense contribution to the mosaic of mother India.

Thus the above mentioned rites and rituals are very important for the Zoroastrians to be followed before death.