Home   Death Meter   Death   Things to do before death   Hinduism

THINGS TO DO BEFORE YOU DIE - Hinduism

The term "Hinduism" was coined by Greek and Persian travelers to the Indus Valley in the 16th century. Though many Hindus have adopted the name for themselves, they also use the terms "Veda," or "Vedic religion," which refer to the ancient texts at the core of the tradition, or Sanatana Dharma (Eternal Law).Hindus follow a strict caste system which determines the standing of each person.

The caste one is born into is the result of the karma from their previous life. Only members of the highest caste, the brahmins, may perform the Hindu religious rituals and hold positions of authority within the temples. Hinduism originated in the Indus Valley in modern Pakistan. 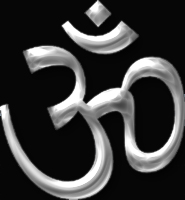 The Vedic texts were not written by any single person, but "heard" by rishis, or seers, and passed down orally until they were recorded in writing. The oldest of the texts is the Rigveda (Wisdom of the Verses), a collection of 1028 hymns thought to have been recorded around 1500-1200 BCE. Other important Vedic texts include the Yajurveda (Wisdom of Sacrificial Formulas), Samaveda (Wisdom of Chants), and Ataravaveda (Wisdom of Atharvan Priests) were also recorded. The Upanisads, secret teachings concerning cosmic equations, were recorded from 1000-600 BCE. From the 2nd century BCE to the 4th century CE two great Hindu epics were recorded: the Ramayana and the Mahabarata. 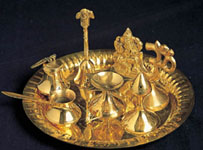 The daily ritual of puja is performed in a sacred corner in a worship room of the home. It is done to keep Hindus aware of their family gods and mindful of their duties as individuals to be performed in their lifetime before death. The ritual of puja has three steps. The first is seeing the family deity (darshana). A small statue or picture of the god is placed in the sacred corner. The second step is the worship of the god, or puja. The worshiper offers the god flowers, fruits, and cooked food (bhog). The third step is retrieving the blessed food (prasada) and consuming it.

For boys in the upper three castes, a second birth ceremony is performed. This is known as the thread ceremony or upanayan which is considered to be an important ritual in Hinduism. During this ritual, boys eat a final meal with their mothers, and then are introduced to man hood. After this ceremony, boys are expected to eat with the men and take on more responsibilities. They "die" of their young self, and are "born" into their new, older self.

Marriage (vivaha) is the middle age passage which leads to the doors of death after an individual's completion of his or her duties to the family. The Hindu marriage is much more than an exchange of vows and rings. Before and during the nuptials, many rites are performed in the presence of family deities. These rites show the importance of a strong bond between a husband and wife. The Vivaha is considered incomplete without the blessings of a spiritual or divine element. The Misri, or ring ceremony, starts the marriage off. Here, the families ask the gods for blessings, the groom's family welcomes the bride into the family, rings and garlands are exchanged between the couple, and the groom's family gives a verbal promise of marriage and feeds misri (crystalline sugar) to the girl's family to confirm engagement.

After the death of a family member, the relatives become involved in ceremonies for preparation of the body and a procession to the burning or burial ground. For most Hindus, cremation is the ideal method for dealing with the dead, although many groups practice burial instead; infants are buried rather than cremated. At the funeral site, in the presence of the male mourners, the closest relative of the deceased (usually the eldest son) takes charge of the final rite and, if it is cremation, lights the funeral pyre. After a cremation, ashes and fragments of bone are collected and eventually immersed in a holy river.

A particular feature of the Hindu ritual is the preparation of rice balls (pinda) offered to the spirit of the dead person during memorial services. In part these ceremonies are seen as contributing to the merit of the deceased, but they also pacify the soul so that it will not linger in this world as a ghost but will pass through the realm of Yama, the god of death.

Other special rituals in a lifetime include the Griha. These are domestic rites that are taught by priests for use in the home. They celebrate new and full moons, changing of the seasons, first fruits of the harvest, the building of a new house, birth of a son, and the above-mentioned, and rites of passage.

Pilgrimage is not mandatory in Hinduism, though many adherents undertake them atleast once in a lifetime before death. Hindus recognize several Indian holy cities, including Allahabad, Haridwar, Varanasi, and Vrindavan. Notable temple cities include Puri, which hosts a major Vaishnava Jagannath temple and Rath Yatra celebration; Tirumala - Tirupati, home to the Tirumala Venkateswara Temple; and Katra, home to the Vaishno Devi temple. The four holy sites Puri, Rameswaram, Dwarka, and Badrinath (or alternatively the Himalayan towns of Badrinath, Kedarnath, Gangotri, and Yamunotri) compose the Char Dham (four abodes) pilgrimage circuit. The Kumbh Mela (the "pitcher festival") is one of the holiest of Hindu pilgrimages that is held every four years; the location is rotated among Allahabad, Haridwar, Nashik, and Ujjain. Another important set of pilgrimages are the Shakti Peethas, where the Mother Goddess is worshipped, the two principal ones being Kalighat and Kamakhya.

Respect for elders is a keystone of Hindu culture where each an every person of the religion should follow from birth to death. This genuine acknowledgment of seniority is demonstrated through endearing customs, such as sitting to the left of elders, bringing gifts on special occasions, not sitting while they are standing, not speaking excessively, not yawning or stretching, not putting one's opinions forward strongly, not contradicting or arguing, seeking their advice and blessings, giving them first choice in all matters, even serving their food first. 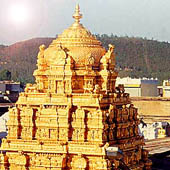 Hindu society recognizes and values interdependence. According to Vedic theology, society can meet everyone's legitimate needs if the various individuals perform their respective duties. These duties embody the ideal of extending God's shelter to others. For this purpose, the system of varnashrama-dharma allocated specific duties to each varna and ashram. For example, the vaishyas were considered responsible for the animals; women were especially entrusted with nurturing children; kshatriyas were obliged to ensure the physical safety of citizens; and sannyasis were required to remind everyone - especially householders - of their spiritual duties.

The obligatory duties prescribed in the scriptures must be followed by one and all without expectation of result but unfortunately in modern times it has become common to perform any act only with some intention.

These prescriptions, which are basic to the practice of Dharma in daily life, have been designed for the welfare of the entire world and hence there should not be any personal motive in discharging these duties. They can be likened to breathing, which is essential for sustaining life.

Hence these prescriptions are termed as Svadharma because they are expression of one's essential nature. But these mandatory practices differ according to one's station in life.