Home   Death Meter   Death   Things to do before death   Santeria

THINGS TO DO BEFORE YOU DIE - SANTERIA

Santeria is an Afro-Caribbean religion which is becoming more widely practiced in North America as immigration continues from Latin America and specifically Cuba. The rituals of this religion are bizarre by conventional western standards and often result in reports of criminal activity or lead police to presume that a criminal act has been committed.

Police officers investigating alleged criminal actions by practitioners of these religions should be familiar with the meaning and potential relevance of religious artifacts and cult practices. Its origin dates back to Cuba and Brazil circa 1515 CE. During the slave trade, Yoruba natives were forcibly transported from Africa to the Caribbean.

They were typically baptized by the Roman Catholic Church upon arrival, and their native practices were suppressed. They developed a novel way of keeping their old beliefs alive by equating the each Orisha of their traditional religions with a corresponding Christian Saint. This religion is a combination of the traditional Yoruba faith and the worship of catholic saints.Divnation is a system by which to fortell the future. In This religion there are four systems of divination available to the santero to help in their quest for knowledge or answers.

According to the beliefs of Santeria, each person is born under a particular guardian saint (Orsha) that must be worshipped [worshiped] throughout life till death. The religion focuses on building relationships between human beings and powerful, but mortal, spirits, called Orishas. An Orisha is a manifestation of Olodumare (God).Followers believes that these spirits will give them help in life, if they carry out the appropriate rituals, and enable them to achieve the destiny that God planned for them before they were born.

This is very much a mutual relationship as the Orishas need to be worshipped by human beings if they are to continue to exist. The guardian saint is central to all rites and magic performed in Santeria. An essential part of those rituals involves the use of herbs, roots, flowers and plants. Most of these and other religious paraphernalia may be purchased from stores called "botanicas" which are found throughout Dade county.

Most formal Santeria rituals also require the use of sacrificial birds and animals. Each of the saints is 'fed' his or her favorite food or sacrifice. The blood of roosters, turtles and goats is the most common offering. Birds such as pigeons, canaries and hens are used in rubbing rituals where the practitioner is cleansed-the evil supposedly passing from the victim to the animal. Followers of an Orisha will offer them food and sacrifice animals to them in order to build and maintain a personal relationship with the divine spirit. The process not only brings the worshipper closer to their Orisha, but makes them more aware of the presence of the Orisha within them. Sacrifices are performed for life events such as birth, marriage, and death. They are also used for healing.

Without sacrifice the religion would die out, as sacrifice is essential for initiation into the faith community and the 'ordination' of priests. The animals are killed by cutting the carotid arteries with a single knife stroke in a similar way to other religious methods of slaughter. Animals are cooked and eaten following all Santeria rituals (except healing and death rites, where the sickness is believed to pass into the dead animal). Eating the sacrificed animal is considered a sharing with the Orisha, who only consumes the animal's blood, while the worshippers eat the meat.

One major ritual is a bembe. This ceremony invites the Orisha to join the community in drumming, singing and dancing.

The Trisha may 'seize the head' of a person (or 'mount them' as if they were a horse), and cause that possessed person to perform 'spectacular dances', and to pass on various messages from the Orisha to community members.

Lucumi religious life is also characterized by public music rituals known alternately as toque de santo, bembe or simply tambor. These four- to six-hour events are hosted on various occasions and for a myriad of reasons. They are usually held in the homes of devotees and encourage socializing. They are commonly used to celebrate individuals' anniversaries of initiation and, in accordance with the Roman Catholic calendar, saint's feast days.

In other cases, many practitioners host a toque de santo when faced with illness, economic hardship, or other challenging circumstances. For these festive ceremonies, santeros transform their homes into places of worship and celebration. With elaborate decorations including fabrics, beads, fruits and many other ritual items, a room is transformed into an altar space called igbodu. Members of the household and close friends prepare a feast which is consumed by all who attend. To fulfill the musical expectations, the host of a toque de santo hires a lead singer, known as akpwon, and a professional percussion ensemble.

During these ceremonies, music fulfills several roles. First, it works in coordination with the other expressive elements (including dance, food, clothing, and decorations) to create a festive environment that helps brings the community together for worship. Second, music is used to lead and entice santeros to become possessed by their patron saint or orisha.

Possession
Rhythmic sounds and feverish dancing during Santerian rituals are believed to lead to possession of the individual by the particular Orisha being invoked. The individual then speaks and acts as the Orisha.
Divination
Divination is a system by which to fortell the future and is believed to be an important practice in Santeria religion. Most of the arts employ some method of divining the future and santeria is no exception. In santeria there are four systems of divination available to the santero to help in their quest for knowledge or answers. They are called Obi or the coconut shells, the Diloggun or the cowrie shells, the Okuele and the Table of Ifa which is the highest oracle in the religion and belongs to Orunla. Some systems are more complicated than others and some require that the seeker have attained a certain level of initiation in the religion before employing that particular method.
Obi 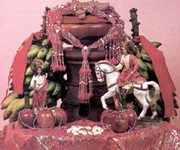 This system is often referred to as darle coco al santo which translated means "give coconut to the saint". This is the most basic form of divination and one does not have tobe an initiated santero in order to employ this method. First a coconut is broken with a hammer and 4 pieces are gathered. They should be about the same size. Once separated from the shell one notices that the meat of the coconut is white and the skin is brown. The oracle is read by throwing the pieces of coconut on the floor and observing the pattern in which they fall, meaning white side up or brown side up. Five possible patterns can result using this method and each particular pattern has a name and a meaning.

The questions posed during this type of reading must be simple direct questions. Anything requiring more detailed answers requires a more precise oracle. Prior to beginning there is a small ritual which must be done. The coconut is washed in water and water is sprinkled in front of the image of the orisha being questioned. Several prayers are said in Yoruba as well. The coconut is examined to make sure the pieces are whole as if a whole piece of coconut breaks during the reading then danger is near. The santero also tears off from each piece of coconut a number of bits that correspond to that particular orisha. These are also placed before the orisha. Several other prayers are said and the reading begins.

Diloggun
This method also called los caracoles or seashells is the most precise method of divination and requires a fully initiated santero or italero to be performed. The oracle consists of 18 cowrie shells of which only 16 are used. The santero throws the shells on the mat and interprets the patterns that come up. Each pattern is known as an oddun and has a corresponding number and name for them. Each oddun has a story or proverb behind it that relates to the seekers concern. Each pattern pertains to a specific orisha. By continuing to cast the shells and interpreting the oddun that results the santero in able to advise the seeker as to their question. This system has much in common with the Chinese I-Ching in that proverbs or legends are used to answer the seekers questions.
Okuele
This is a system of divination reserved for the babalawo only. The Okuele is a chain made up of 8 coins or medallions made from coconut shells. The babalawo is able to interprete the manner in which the medallions fall and thus arrive at an answer to the seekers question.

Thus African religion has possession but so do some of the Christian sects when they speak in tongues or get the Holy Ghost. One can say the idea of the Santeria Religion came about because slaves still believed in their religions even with the brutality of slavery and "Santeria" enabled them to save their religious beliefs. In order to survive the atrocities of slavery they had to call upon their own deities in a guise of Christianity.